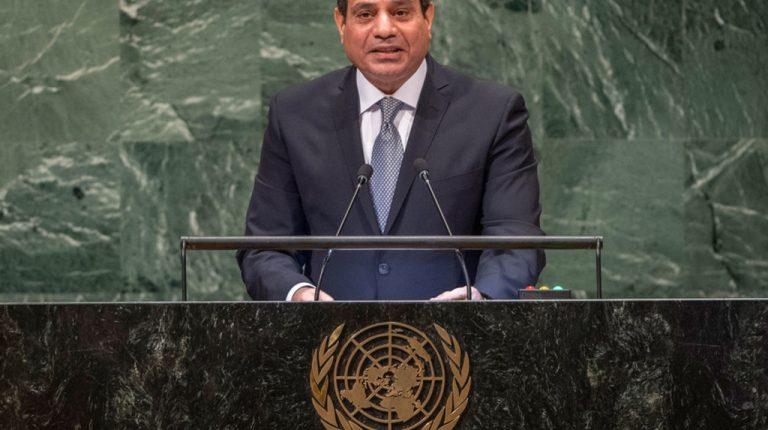 Egypt’s President Adel Fattah Al-Sisi has asserted an “inevitable” need to develop a global system to combat terrorism and counter whoever provides terrorist groups with logistic and financial support.

“Based on [Egypt’s] experience in supporting counter-terrorism efforts in the Middle East and North Africa,” Al-Sisi said during his speech before the 73 Session of the United Nations General Assembly on Tuesday. “I can assure you that the level of finance, the sophistication of arms and training, as well as the means of communication obtained by these extremist groups, and the facilitation of movement and travel of foreign terrorist fighters, point to the inevitable need to develop a global system to combat terrorism,” he added.

He further mentioned the comprehensive military operation (Sinai 2018), and his country efforts in combating terrorism.

On the other hand, Al-Sisi addressed alleged human rights concerns inside Egypt and asserted that, “his country has a solid constitutional foundation for the protection of human rights,” elaborating that “major strides have been achieved in the field of women and youth empowerment.”

Moreover, Al-Sisi said that there is a flaw in the international system, which “negatively affects its performance and casts a shadow over its credibility.”

“We need shortcomings in the international community’s handling of human rights issues,” Al-Sisi said, adding “the credibility of the United Nations cannot be restored, as long as millions continue to suffer from extreme poverty, live under foreign occupation or fall victim to terrorism and armed conflict.”

During his speech, Al-Sisi summarised Egypt’s vision in three key principles including, achieving an effective international order and stability, the commitment to peaceful and sustainable solutions to international conflicts, and achieving sustainable development to prevent armed conflict and humanitarian crises.

He emphasised that achieving those principles requires partnership and cooperation between Egypt, the UN and regional organisers.

“I speak out of Egypt’s unique experience, where its people have exerted tremendous efforts to restore their state and save their identity,” said Al-Sisi.

He added, “[Egyptians] chose the nation-state to be their vehicle for reform and to realise their aspirations for freedom, development, and dignity.”