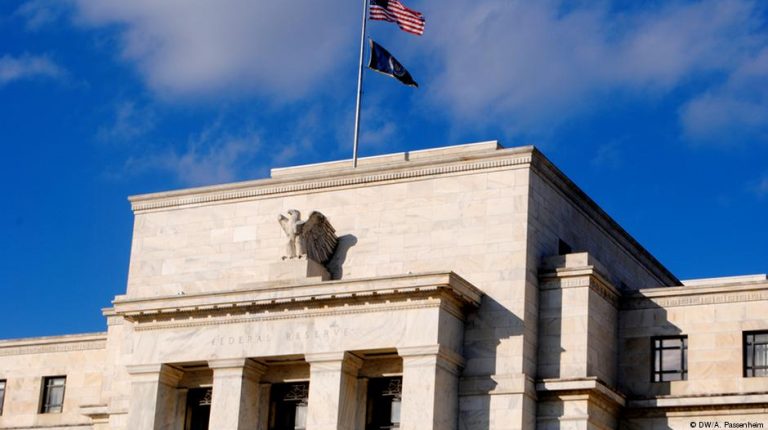 The American central bank has raised the benchmark interest rate by a quarter-point but showed no indication it would be more aggressive in monetary tightening. It also left its outlook for the coming years unchanged.In a policy statement released on Wednesday, the US Fed rate-setting Federal Open Market Committee (FOMC) said it would lift the benchmark overnight lending rate by a quarter of a percentage point to a range of 2.00 percent to 2.25 percent.

Moreover, the central bank foresees another rate hike in December and three more next year, to be followed by another increase in 2020.

That would put the benchmark rate at 3.4 percent in two years — roughly half a percentage point above its estimated “neutral” rate of interest that neither stimulates nor restricts the economy.

Read more: US growth revised up on investment and export spurt

In its closely-watched statement, the FOMC removed a longstanding phrase which described the Fed’s rate stance as providing stimulus to the economy.

Policymakers see the US economy growing at a faster-than-expected 3.1 percent this year and continuing to expand moderately for at least three more years, amid sustained low unemployment and stable inflation near the central bank’s 2 percent target.

“The labor market has continued to strengthen … economic activity has been rising at a strong rate,” the Fed statement said.

Read more: Fed moves to prevent US economy from overheating

The US central bank is staying on course for tighter policy as unemployment heads toward multi-decade lows, wage growth accelerates to its quickest pace in nine years, and estimates point to annualized third-quarter growth exceeding 4 percent.

Donald Trump’s decision to impose tariffs on nearly $200bn of Chinese imports has dented confidence among some US businesses, but the Fed made no reference to trade worries in its post-meeting statement. Risks to the outlook remain “roughly balanced,” it said.