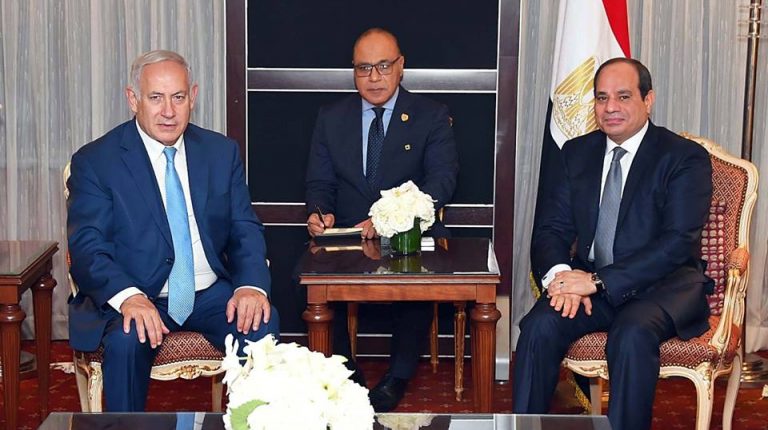 President Abdel Fattah Al-Sisi holds several bilateral meetings on Wednesday, on the sidelines of their participation of the 73 round of the UN General Assembly in New York.

The president discussed bilateral relations between Egypt and Portugal with his Portuguese counterpart Marcelo Rebelo de Sousa, as well as the latest updates in the Middle East and the preparations of holding the mutual committee between the two countries.

Al-Sisi also met with the Italian Prime Minister Giuseppe Conte, in the first meeting between the two leaders since Conte was elected in May this year. The meeting discussed bilateral cooperation in the economic and commercial level.

They also addressed the updates of the case of the murder of an Italian graduate student Giulio Regeni who was found killed in Cairo in 2016. Al-Sisi renewed Egypt’s commitment to reveal the truth about the case. The two leaders discussed also the situation in the Middle East particularly in Libya.

Another meeting gathered Al-Sisi with the Israeli Prime Minister Benjamin Netanyahu, to discuss the ways for reviving peace process. During the meeting Al-Sisi stressed the necessity of resuming negotiations between the Palestinians and Israelis to reach a comprehensive and fair solution for the Palestinian issue, in accordance with the two-state solution.

Also on Wednesday Al-Sisi stressed that climate change is the most needed challenge to be faced among the other challenges that the world face currently, as the impacts of climate change will affect the whole world and cause economic costs also.

During his participation in a session about implementing Paris Agreement for countering climate change, the president called upon the whole world to raise awareness on climate change and the importance of decreasing temperature to the level before the industrial revolution.

Al-Sisi stressed Egypt’s commitment to the agreement, and not loading additional burdens on developing countries. “We have noticed early in Egypt the negative impacts of climate change, such as the threat of Sea Level Rise (SLR) and its impact on the Nile Delta, as well as soil salinisation, and other hard phenomenon including sand storms, desertification, and torrents, in addition to the negative impact on the biodiversity,” he said.

The president highlighted that despite Egypt’s need to cheap sources for energy to boost the country’s efforts for development, Egypt took important steps in relying on renewable energy and decreasing usage of coal, in order to decrease carbon emissions. He pointed out that despite Africa is the least continent in emissions, it is the most affected continent by climate change impacts.