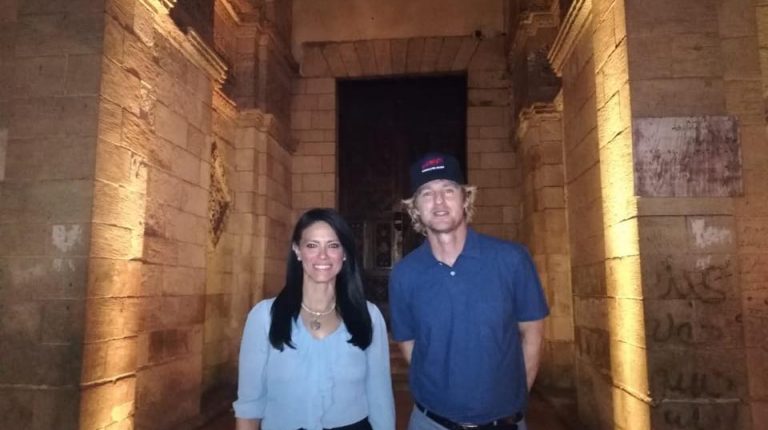 At the same month of which the world has its eyes on Egypt with several global superstars roaming it, prominent comedian Owen Wilson arrived in Egypt to participate at the closing ceremony of El-Gouna Film Festival (GFF), yet the visit could not be completed without a tour in Egypt’s various cities. Wilson’s pictures went viral on social media, while he roamed Cairo, visiting Al-Hussein district, stopping to take pictures with people, while being accompanied by the minister of tourism, Rania Al-Mashat.

On her twitter account, Al-Mashat published a picture of Wilson dancing with a performer of the “Tanoura” heritage dance, and another of both of them standing in Al-Muizz street, while “going back in time on an authentic journey and getting a glimpse of the Old Cairo in Khan el Khalili district,” as her tweet described.

His pictures were shared with the hashtag #ThisisEgypt, the main hashtag of the international campaign promoting tourism in Egypt.

Before heading to Hurghada, Wilson passed by Luxor for a quick tour, which included visiting the city’s most ancient touristic spots. He started his tour with a visit to the Karnak Temple, before he strolled the River Nile by a sailboat to head to the western bank of the city and visited the tombs of the Valley of the Kings.

According to Egypt’s State Information Service’s official Facebook page, Wilson expressed his astonishment and admiration for what he saw from the ancient Egyptian civilisation and expressed his desire in the production of a great American film about the Pharaonic civilisation.

Meanwhile, American actor Patrick Dempsey is currently on a visit to Hurghada, as a part of his participation at the second edition of GFF.

Earlier in the month, American superstar and Grammy Award winner, Alicia Keys visited Egypt for several days with her husband disc jockey and rapper, Swizz Beatz, and their two children.

Unlike Wilson, who is not highly active on social media, Keys and Beatz could not hide their extreme excitement and shared with their fans their happiness of camel riding, exploring cemeteries or even just chilling and roaming Cairo’s streets.

Cannes kicks off with homage to Bertolucci