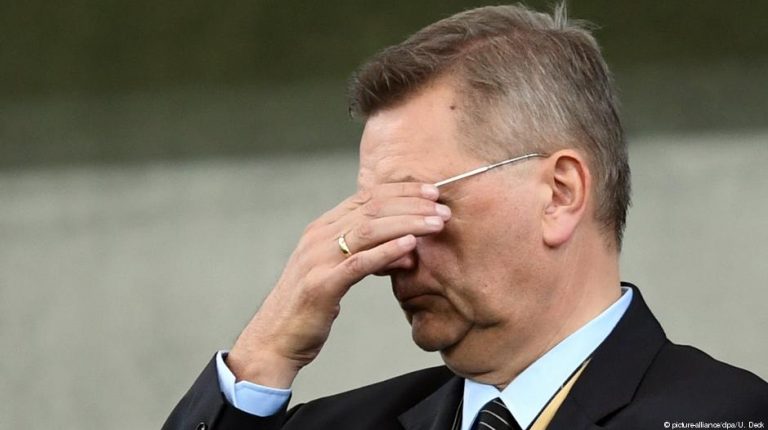 Many believe that Germany must win the bid to host the 2024 European Championship if DFB President Reinhard Grindel is to carry on in the post long term. His current mandate only runs until September 2019Could the fate of German Football Association (DFB) President Reinhard Grindel be decided in Nyon this Thursday? One thing is clear; should Turkey win the UEFA Executive Committee vote to decide which country will host Euro 2024, it will be difficult for him to carry on in his current role.

After all, immediately following his election to the post in April 2016, Grindel made winning the right to host the 2024 European Championship his top priority, arguing that the tournament would “bring a new set of dynamics into play in German football.” He made no secret of the fact he was personally overseeing the effort to win the hosting rights.

However, little appears to remain of the overwhelming support within the DFB that Grindel seemed to have almost two and a half years ago, when he was elected president of the German FA by a vote of 250-4.

And this has much to do with the expectations placed upon him when he took the job. Politicians hoped that the former parliamentarian for Chancellor Angela Merkel’s Christian Democrats would be able to get to the bottom of the affair surrounding how Germany was awarded the right to host the 2006 World Cup – an affair that led to the resignation of his predecessor, Wolfgang Niersbach. Representatives of Germany’s amateur football clubs and associations hoped that he would strengthen their position with relation to the Bundesliga and its clubs. So far, the 57-year-old has managed to do neither. As a result, the reservations some had voiced about the fact he comes from a political as opposed to a football background are again being raised.

Grindel also didn’t do himself any favors with the way he handled the affair surrounding Germany players Mesut Özil and Ilkay Gündogan after they posed for photographs with Turkish President Recep Tayyip Erdogan prior to the World Cup in Russia. Grindel first took a hard line, saying that by posing with Erdogan, the two players had done nothing to help the DFB’s work on fostering the integration of people with migrant backgrounds. But just a couple of days later, he struck a much more conciliatory tone, saying: “Human beings can makes, and we must keep things in perspective.”

After Germany’s embarrassing elimination at the group stage in Russia, Grindel changed course again, demanding that Özil, who until then had refused to comment on the Erdogan meeting, explain himself to Germany fans. The Germany player did eventually respond, not only announcing via his Twitter account that he was retiring from international football, but taking the opportunity to strike back at Grindel saying that not only did he feel he had been wronged by the DFB as an organization, but also by Grindel personally.

“Whilst I attempted to explain to Grindel my heritage, ancestry and therefore reasoning behind the photo, he was far more interested in speaking about his own political views and belittling my opinion,” Özil said.

Grindel also doesn’t appear to have made many friends among other senior football officials during the bidding process for Euro 2024. According to the German news magazine Spiegel, Grindel sent a letter to UEFA President Gianni Infantino after he too had met with the Turkish president, demanding neutrality from European football’s top official. Infantino, the report said, was both surprised and disappointed by the “tone and content” of the letter.

Grindel also fired off a letter after UEFA Executive Committee member Michael van Praag praised Turkey’s bid. However, the DFB played down both incidents, saying Grindel had patched things up with Infantino in a personal conversation, and that there was no discord between Grindel and van Praag. Still, the very fact the DFB had to comment on the president’s comments certainly doesn’t speak for his skills at diplomacy.

Lahm as a possible successor?

Nobody can really say whether Grindel will be forced to go if Germany loses its bid to host Euro 2024 on Thursday, but it can’t be ruled out. Speaking to the Frankfurter Allgemeine Zeitung recently, DFB General Secretary Friedrich noted that Grindel’s mandate only runs until September of 2019, before adding that “unfortunately it is completely normal that in case of failure, there are bound to be discussions about structure and personnel (in the DFB), even if this isn’t always fair.” What also can’t be ruled out is the possibility of Grindel stepping down if he is unable to realize the project he made the top priority of his mandate. Even if Germany does win the right to host Euro 2024, in light of his growing number of critics, his job could still be under threat. Some are already touting former Germany captain Philipp Lahm, who is the ambassador for the German bid, as his possible successor.