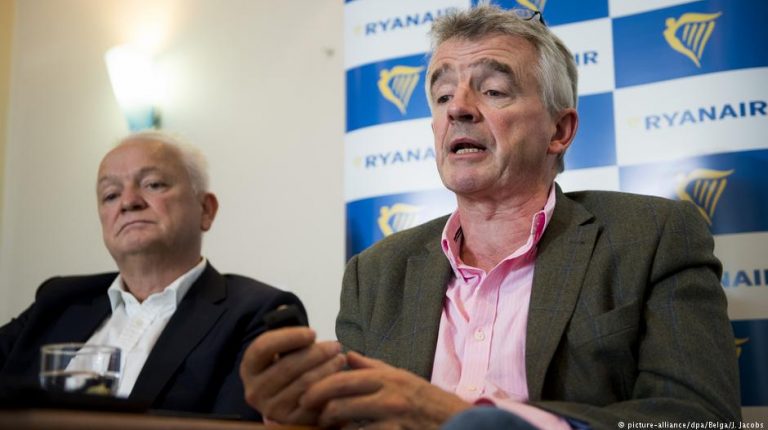 The Irish low-cost carrier has in 2018 become synonymous with strikes. While the airline has managed to operate the overwhelming majority of its flights, reputational damage has been unavoidable.In the not-too-distant past, there were always a few people wary of booking Ryanair flights for rather epicurean reasons.

An insufficiently fluffy cushion, too little leg room, or simply the general sense that their time in the air was not attended to with the kind of red-carpet treatment they felt they deserved.

Ryanair made a virtue of not caring about such quibbles. Led by their incorrigible CEO Michael O’Leary, the airline traded on their rough-and-ready image, confident that their core qualities of providing reliable, on-time, cheap flights to and from multiple destinations across Europe would make them the continent’s dominant airline.

It turned out that the vast majority of flyers didn’t really care about being pampered. What really mattered was that Ryanair got you from A to B cheaply, on time and perhaps most crucially of all, on flights that were not going to be cancelled.

How things have changed. Now, travelers across Europe are wary of booking Ryanair flights for the very opposite reasons for which they used to book in their droves.

The Irish airline has been beset by strikes this summer, particularly unwelcome given the damage a cancelation crisis late last year had already done to the low-cost carrier. This Friday (September 28), another big strike takes place, with Ryanair canceling some 150 flights due to cabin crew strikes in Belgium, Germany, Italy, the Netherlands, Portugal and Spain.

Cancelations, increased air fares and delayed flights: the airline has had to adjust quickly to a whole new lexicon while passengers have had to adjust to a new reality.

The latest strike action is the second pan-European action to have hit the company this summer, with similar action having taken place back in July.

While the latest wave of cancelations (affecting around 30,000 passengers) are primarily caused by cabin crew strikes in the aforementioned countries, some German-based Ryanair pilots from the Vereinigung Cockpit (VC) trade union will also take part. In total, around 10 percent of Ryanair’s German flights will be affected while around 6 percent of Ryanair’s some 2,400 continent-wide flights are affected.

Read more: Up in the air? Ryanair’s growing pains

The issues are not so straightforward that a simple pay rise solves them. Arguably of most significance is the desire of some Ryanair staff across Europe to be answerable to local employment laws, rather than the employment law of Ireland, where the airline is based.

For example, Ryanair has just struck a three-year deal with cabin crew unions in Italy, with a central plank of the agreement being the fact that staff based there can now get local contracts with associated benefits and rights.

Ryanair has long held to the practice of initially employing staff on external contracts, before updating them to Ryanair contracts, based on Irish industrial law. While the airline’s pay structures and wages are far from the best in Europe — and pay increases are part of many of the current demands — the grievances leading to most of the ongoing strike action across the continent are concerned with issues similar to those resolved in Italy.

More than meets the eye to these strikes?

Ryanair is in continuing negotiations with pilots and cabin crew in several countries, but those negotiations have been complicated by the fact that their staff are represented by various trade unions, and many by none at all.

The airline has consistently pointed out that the trade unions involved have exaggerated the level of damage the strike action has done to the airline’s schedules and when one looks at the relatively small amount of Ryanair flights that have been cancelled in relation to the amount that they fly each day — usually around 5 to 8 percent of their flights — that claim appears to hold true.

Ryanair have consistently been able to maintain the vast majority of their schedules due to the fact that their staff are not gathered under any single industrial umbrella — the majority of the carrier’s employees have continued to show for work when strike action has been called in the various countries.

Indeed, Ryanair has regularly complained that much of the strike action is driven by trade unions with connections to rival airlines. For example, the VC pilots union — a familiar Ryanair foe — is consistently labelled by Ryanair as a Lufthansa union.

The airline has now formally complained to the European Commission over what it says is the interference of competitors’ crew, unions and lobby groups in Ryanair’s ongoing negotiations with its staff.

Earlier this week, Ryanair published details of what it had already offered to its pilots and cabin crews across Europe. It did this, it said, “in order to set the record straight, correct competitor trade union propaganda and pave the way to a speedy conclusion of collective labor agreements (CLAs) with its people and their unions.”

The trade unions at loggerheads with Ryanair say negotiations are not making progress and rejected the airline’s claims.

“It is impertinent to give the impression that Ryanair personnel is externally controlled,” said VC representative Ingolf Schumacher. “This is another example of the distorted view of the despotically acting boss. The VC strike demands have been decided on by elected Ryanair pilots who know exactly what the needs of Ryanair cockpit personnel are.”

Up in the air

As ever in such negotiations, finding a clear source of blame is not easy but ultimately it is customers who are losing out.

Although Ryanair are managing to maintain schedules, the uncertainty that the industrial action has created has clearly started to affect bookings, something its chief operating officer admitted earlier this summer.

“In the past, Ryanair was always the first place I checked for flights and I would never have hesitated to book them if the price was right,” PJ Egan, a 30-year-old who regularly flies around Europe from Ireland, told DW.

“But recently for a trip to England I specifically booked a different airline because I was concerned about Ryanair cancelations. And at the moment I am holding off on booking a trip to Germany because there seems to be constant news about Ryanair strikes over there.”

Regardless of the outcome of the blame game, Ryanair knows it ultimately needs to secure more agreements such as the one it recently secured in Italy, if it is to keep such sentiments at bay.