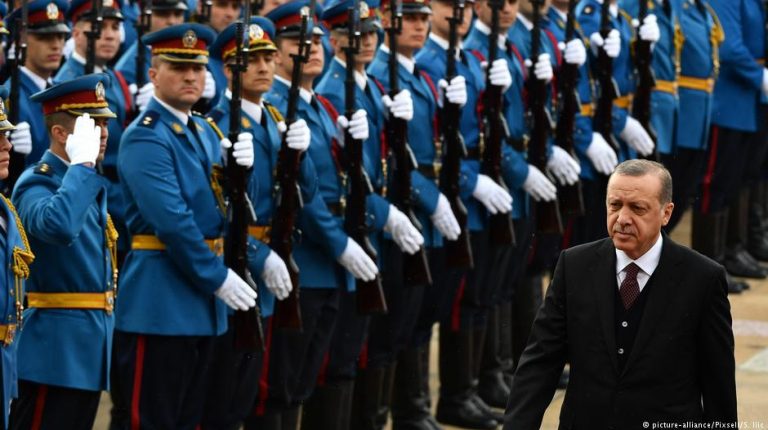 As Russia, the EU and China eye the Western Balkans, it may be that the old colonial power, Turkey, is best placed to play a key role in the region. And this perhaps because of, not despite, its economic problems.Turkey has long considered the Western Balkans part of its sphere of influence.

The Ottoman Empire encompassed Serbia, Bosnia-Herzegovina, Macedonia, Albania and Kosovo up to 1918. A century on from the Ottomans’ demise, Turkey is again looking covetously at the region.

Turkey’s share in Serbia’s foreign trade is only about 3.5 percent, but it has crept almost without notice into Serbia’s top 10 trading partners and Kosovo’s top three. Turkish construction companies, for example, are building and will operate 20 power plants in Serbia.

Emerging Turkish-Serbian economic relations are indeed likely to be focused on energy, the showpiece being the Turk Stream gas pipeline led by Russian energy giant Gazprom.

Read more: The new Balkan Dream is a $2,000 per month telecommute

The Western Balkans makes up only a fraction of Turkey’s foreign trade, compared with trade with the European Union of around €145 billion ($165 billion). But President Recep Tayyip Erdogan recently spoke of increasing Turkish investments in Serbia to $5 billion in the longer term, from around €1.7 billion in 2017.

Still, with the Turkish lira down 42 percent against the dollar this year, there are questions as to whether Ankara can meet its promises of investment in the EU’s southeastern backyard.

“We are worried that the crisis in Turkey cannot be without repercussions for us,” Serbian Trade Minister Rasim Ljajic said recently.

Analysts agree that the weakened lira will have a negative impact on Turkish government spending, meaning fewer funds will be available for the Turkish state’s activities in the western Balkans.

“But this does not necessarily mean that Turkish private sector investments will decline,” Gareth Jenkins, a senior researcher at the Institute for Security and Development Policy, told DW.

In fact, over the last 18 months, there has been a significant increase in Turkish private sector investment abroad, as a result of narrowing profit margins inside the country and concerns over rule of law.

Read more: ‘2025 is ambitious for western Balkans to join EU’

“Keeping money in safe accounts in the relatively stable Balkans might be considered a good idea by many Turkish businesses,” Poland-based Balkan expert Jan Mus told DW. He points to Serbia’s $400 million loan from Turkey’s Exim Bank to develop infrastructure.

“We have not seen any negative development in Turkey’s western Balkan economic relationships because of the current difficulties in the Turkish economy so far,” Alper Ücok, a representative of TUSIAD Berlin, the Turkish Industry & Business Association, told DW.

“The amount of investments and trade is simply too low to have a significant impact in those markets. In that regard, for the western Balkans, the best is yet to come from Turkey,” Aleksandar Medjedovic, a board member of the Turkey-Croatia Business Council at DEIK in Istanbul, told DW.

“My estimation is that in the long term, we will see more investments from Turkish companies, not only in the Balkans but also all over Europe,” he added.

And the EU is the desired destination for many Turkish firms investing in Serbia.

“Turkey has a fast-paced economy, strong manufacturing sectors and global trade relations and is in constant need of new markets and production locations. In countries like Serbia, Croatia or Slovenia it sees an ‘entry gate’ to EU markets, producing closer to European customers,” Medjedovic says.

However, it is unclear at times if the EU is more worried about Turkey’s apparent move into the western Balkans or the effects of its apparent rapid exit on the geopolitical balance in an area eyed by Moscow, Beijing and others.

In the first such meeting for 15 years, EU leaders met counterparts from Serbia, Albania, Bosnia, Montenegro, Macedonia and Kosovo in May and agreed to build more energy links and work more closely on countering radicalism and controlling migration.

But EU leaders also said the region could not expect fast-track membership of the bloc. Serbia’s targeted membership date is now 2025, 12 years after Croatia and two decades after Slovenia joined the bloc.

Some in Turkey argue that their country’s role in the western Balkans does not compete with the EU’s plans there, but in fact complements them. “Turkey is not Russia,” Sinan Ülgen, a former Turkish diplomat and visiting fellow at think tank Carnegie Europe, told Politico. “Turkey is not in the business of trying to dissuade the Western Balkan countries from converging with the EU — on the contrary.”

Recent moves by Ankara though have piqued renewed interest from the EU in its often neglected southern backyard, which are also driven by fears about Moscow’s role there — from selling fighter jets to Serbia to an alleged role in a coup attempt in Montenegro.

Speaking to the European Parliament in May, French President Emmanuel Macron put Ankara and Moscow in the same box, saying he did not want the Balkans to “turn towards Turkey or Russia.”

China sees the region as a corridor into Europe, part of its so-called “Belt and Road Initiative.” Projects include a sea bridge in southern Croatia, while Huawei Technologies will upgrade the Serbian phone company and is building a highway in Montenegro to connect Belgrade with the Adriatic.

Russia, meanwhile, is investing heavily in large projects, especially in the energy sector. There are approximately 1,000 companies in Serbia owned partially or entirely by Russians, with estimated revenues of €5 billion.

To put this into perspective, though, four of the five biggest investors in Serbia are from the EU and Serbia trades far more with both Germany and Italy individually than with Russia, despite a free trade agreement between the two countries. The EU calculates that last year it accounted for 73 percent of trade within the non-EU Western Balkan countries, while China and Russia each had a share of about 5 percent.

A report by the Center for the Study of Democracy tracks Russia’s increasing involvement in the region concluded that the western Balkans remain vulnerable to Russian pressure due to the presence of its businesses in strategic sectors like energy, banking, metallurgy and real estate.

In Serbia, the Russian presence is estimated officially at about 10 percent of the country’s GDP, mainly in the energy sector, although this probably underestimates the real value of Russian investment. “Much of Russian foreign direct investment in the country comes through Russian-owned companies with offices in EU member states, such as Austria and the Netherlands,” the report notes.