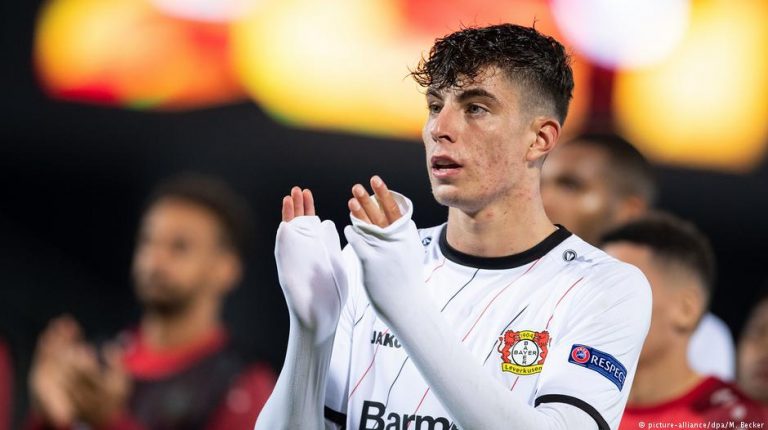 A string of excellent performances has seen Kai Havertz become Bayer Leverkusen’s key man. With Borussia Dortmund in town on Saturday, the German prodigy has a chance to show he’s worth every bit of the recent hype.That hopes are pinned on a teenager in the build up to a home tie against an in-form Borussia Dortmund would be a ridiculous notion were that player not Kai Havertz.

The 19-year-old’s brilliance is nothing new, Havertz has been making headlines since he became the youngest player ever to appear for Leverkusen in Germany’s top-flight in 2016. Not content with that, he then became the club’s youngest ever goal scorer after netting against Cologne in December that year; 70 matches, 11 goals and 16 assists later, Havertz has become Leverkusen’s not-so-secret weapon.

What is new, is the consistency to his game. To borrow a line about a certain Wigan Athletic forward, Havertz is on fire. Two goals against Ludogorets in the Europa League in September preceded the winner against Mainz in the Bundesliga last weekend. He was integral again as Leverkusen brushed aside Fortuna Düsseldorf on Wednesday night, laying on an assist for Kevin Volland in a 2-1 victory. Not a bad month’s work for a man born after Titanic hit cinemas.

It’s not just a case of getting himself on the scoresheet, either. Havertz is playing with a swagger most 30-year olds would envy; dribbling at opponents, getting into scoring positions, always looking for a forward pass. Of any Leverkusen player to feature in at least 45 minutes of football this season, Havertz has the highest pass completion rate with over 90%. He’s quickly becoming the man teammates look for as soon as the ball is won back. He was born in 1999.

Nobody will be more smug about this sudden coming-of-age than Joachim Löw. The Germany coach’s nine-year reliance on playmaker Mesut Özil ended in bitter fashion over the summer. Just as well, then, another freakishly talented number 10 with a sixth-sense for finding space is fresh off the production line. And guess what: this one comes without any of that pesky multicultural baggage that has DFB officials reaching for the self-destruct button.

Havertz collected a long overdue first cap in Germany’s recent coming off the bench for the final two minutes in a 2-1 friendly win over Peru. If his current club form continues, he’ll soon be getting a lot more playing time than that.

Leverkusen’s home clash with Dortmund this weekend should provide a further test of their wunderkind’s potential. It’s one thing doing it against Düsseldorf and Mainz; it’s different kettle of fish with Axel Witsel breathing down your neck. If he provides another match-winning display this weekend, Havertz-mania will go into overdrive.

A win would officially lay to rest those early season hiccups which saw Leverkusen lose their opening three matches. Three points would elevate them back among the chasing pack behind Bayern and, more importantly, within touching distance of those occupying the Champions League positions.

Dortmund coach Lucien Favre will no doubt have his players well drilled for a tricky clash this weekend. Dealing with Leon Bailey’s pace will be high on his list of defensive priorities. Ditto Kevin Volland’s movement and Julian Brandt’s crossing. Fail to deal with the boy who doesn’t turn 20 until next summer, though, and it could turn into a long afternoon at the BayArena.