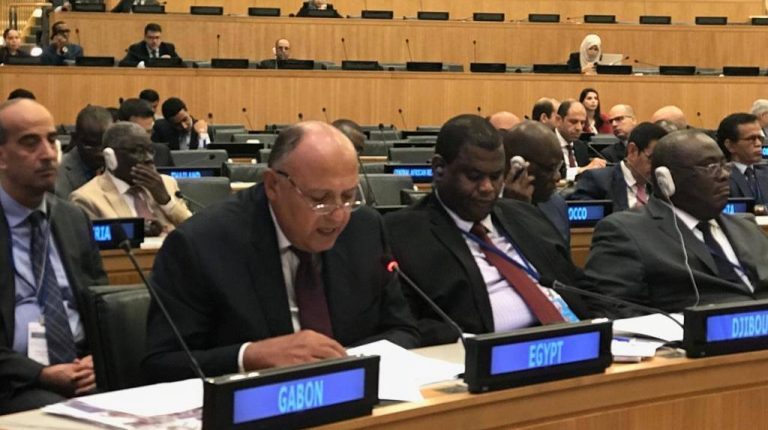 Egypt’s Foreign Minister Sameh Shoukry has stressed that the two-state solution is the only pass to end the long-decades crisis between Israelis and Palestinians.

“There is no other way but the two-state solution and establishing an independent Palestinian state with East Jerusalem as its capital,” said Shoukry at the Organisation of Islamic Cooperation (OIC) meeting.

Shoukry added that Egypt will spare no effort to reach a just and comprehensive peace deal for the Palestinian people that protect their legitimate rights, as well as supporting the Palestinian reconciliation between the two rival factions Hamas and Fatah.

On the Libyan situation, Shoukry underlined the importance of enhancing the Libyan legitimate institutions including the security forces and the military to take the lead to maintain security and stability.

Furthermore, Shoukry renewed his country support for the political solution in war-torn Syria, with the aim to put an end to the bloodshed.

Moreover, Shoukry took part in a mini-summit on the situation in Syria, with the foreign ministers of France, Germany, Jordan, Saudi Arabia, the United Kingdom, and the United States.

“There is an urgent need for concerted diplomacy and international political will to end the conflict [in Syria],” read a joint statement, adding that the “hundreds of thousands of lives lost, and millions forcibly displaced by violence both within Syria and beyond its borders.”

Separately, Shoukry held meetings with his Russian, Swedish, Estonia, Irish, Finn, Pakistani, and Burundi counterparts on the side-line of the 73rd session of the UN General Assembly in New York.

Shoukry addressed with his counterparts enhancing bilateral cooperation and issues of common interest.

During his meeting with the Russian Foreign Minister Sergey Lavrov, Shoukry emphasised the significance of increasing Russian investments in Egypt, especially in the field of manufacturing, referring to the 50-year agreement with Russia to build an industrial zone in the new Suez Canal Economic Zone.