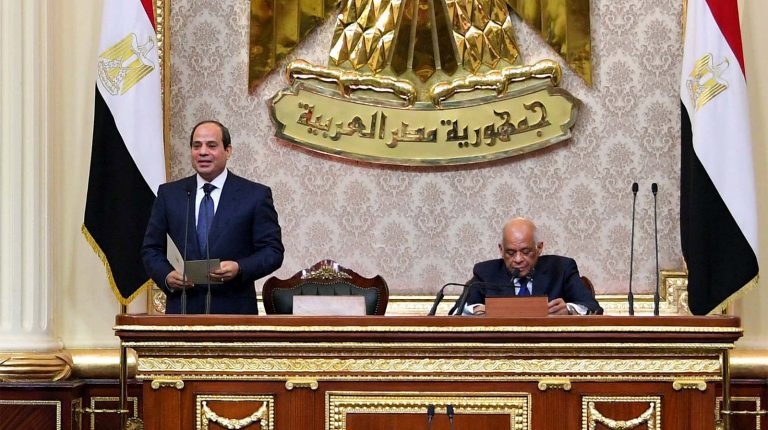 The Egyptian House of Representatives is going to convene on Tuesday, marking the beginning of its fourth and before the last legislative round. The house was elected in 2015 and held its first session 10 January 2016. President Abdel Fattah Al-Sisi was elected in 2014.

The parliament passed hundreds of laws since its recent establishment, some of which were the subject of public objection on both the economic, and political levels, including laws on media, and social media. Other laws came amid major economic reform policies implemented by the regime.

Composed of over 500 members, parliament includes a significant number of members who support the president, and the regime, mostly known as Egypt’s Support Coalition.

In an analysis asking what role parliament has played in Egypt’s transition process until 2017, political science expert Jan Claudius Völkel concluded that it was—and probably remains—unable to achieve a proper degree of autonomy.

Several parliamentarians have also passed away during its course, the most recent being MP Hossam Refai, who represented North Sinai residents. Refai was known for an elevated tone in demanding the residents ‘rights in the north of the peninsula, which has been witnessing a war against terrorism for nearly five years.

In February, the Egyptian military launched one of its largest security operations aiming to eradicate extremist militants in the area, which resulted in difficult circumstances for the residents, which Refai had spoken of, including shortage of basic goods, and movement restrictions.

Tensions with members voicing opposition inside parliament have escalated, especially between parliament speaker, Ali Abdel Aal, and members of the 25-30 coalition.

Disputes reached a peak when the coalition stood against a publicly divisive and court disputed deal which would transfer two Red Sea islands to Saudi Arabia. Parliament passed the agreement in June 2017.

Al-Sisi was elected for a second term in sweeping elections, which observers said were one-sided.

Taking the oath and addressing parliament on 2 June, the president vowed to operate with a more inclusive approach implying political opponents, provided they are not engaged in violence.

“All people have the right to political discussions and negotiations, except for those who commit and incite violence and terrorism,” Al-Sisi stated.

Parliament finally passed in May a long-awaited law on ride-hailing applications as Uber and Careem companies have been growing in the Egyptian market for a couple of years.

The law was debated for some time between the companies’ representatives and the government, as the latter insisted on having a grip over customers’ databases.

The final version of the law dropped the suggestion, instead requiring that companies keep users’ data for 180 days, and provide information on users upon authorities’ request, or according to the law.

In its last legislative term, parliament also passed laws regulating traditional and new media, including the use of social media.

In June parliament passed the Anti-Cyber and Information Technology Crimes law, which aimed to combat hacking, and allow the blocking of online websites should their content be considered threatening to national security.

Then in July, parliament passed a law regulating media and social media targeting popular accounts under the pretext of combatting fake news, putting accounts with more than 5,000 followers under legal responsibility.

During that third legislative term, parliament also passed a comprehensive health insurance law, giving military officials immunity from interrogations over any action committed during their service, and establishing the Egyptian Space Agency, and a law selling the Egyptian citizenship to foreigners.

The extension of the state of emergency could be one of the first decisions on parliament’s agenda since the last three-month allowance was approved on 24 June.

Al-Sisi first declared a state of emergency across the country in April 2017. The decision, stated to be among a series of measures aimed at combatting terrorism, followed the Palm Sunday attacks against two Churches in Egypt, which killed dozens, and was claimed by the Islamic State group.

According to the constitution, “after consultation with the cabinet, the president may declare the state of emergency as regulated by law. Such declaration must be presented to the House of Representatives within the following seven days to decide thereon as it deems fit.”

Parliament permitted the declaration shortly after. Every three months, Al-Sisi would extend the state of emergency and then parliament would approve it. The state of emergency, severely contested during the 2011 revolution, allows for exceptional security measures including detaining orders or search warrants, regardless of the criminal law procedures, and guarantees.

A separate state of emergency was implemented in more crucial area of North Sinai in 201,4 with curfew hours in some cities such as Al-Arish, Rafah, and Sheikh Zuweid, following extensive militant attacks against security forces. On several occasions, the government renewed or extended the decision.

Abdel Aal has also visited a number of countries this year, including Bahrain, the United Arab Emirates, Ireland, Germany, and participated in the Inter-Parliamentary Union session in Switzerland.

The president of parliament also received foreign diplomats and representatives, and headed one of several parliamentary delegations’ visits to the United States.

Parliament has been playing a role in sending out members to promote Egypt, and respond to criticisms by foreign reports, especially those concerning the human rights situation in Egypt.

Pending laws, as per constitution

Constitutional Article 241 stipulated that “in its first legislative term after the enforcement of this constitution, the House of Representatives shall issue a law on transitional justice that ensures revealing the truth, accountability, proposing frameworks for national reconciliation, and compensating victims, in accordance with international standards.”

Meanwhile, Article 53 stated that equality between citizens, and prohibited discrimination based on religion, belief, sec, origin, race, etc…the constitution defined discrimination and incitement of hatred as crimes punishable by law, and ordered that “the state shall take necessary measures for eliminating all forms of discrimination, and the law shall regulate creating an independent commission for this purpose.”

These two laws are still pending parliamentary action, despite that the latter had been drafted and suggested by different members of the parliament.

Following the re-election of President Al-Sisi, deliberation about the extension of his four-year due presidential term resurfaced. The suggestion had already been made before inside parliament, with supporters arguing that four years would not be enough for the president’s plans to be implemented.

Most MPs agreed that the extension should be for six years instead of four, but were rather reluctant to change the number of presidential terms, set at two by the constitution.

On a different note, a social debate had erupted around possible amendments to the personal status law organising parenting and child custody, as a suggested alteration to the law would enable fathers to host children in the custody of their mothers for longer periods.

Topics: The Egyptian House of Representatives

House of Representatives law to be amended during fourth legislative round