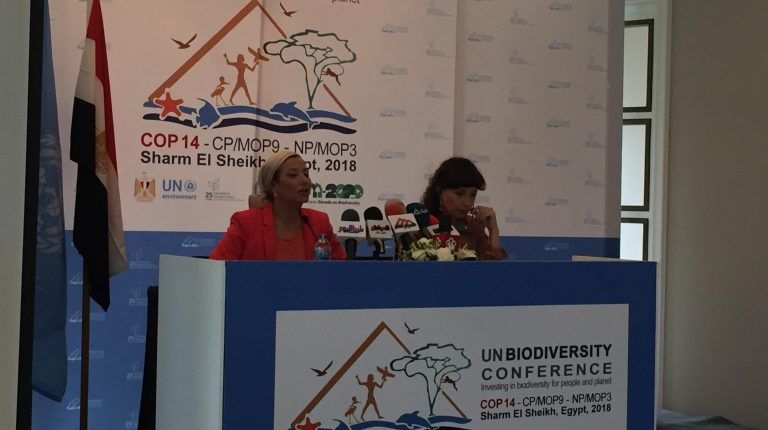 The UN Assistant Secretary-General and Executive Secretary on the UN Convention on Biological Diversity Cristiana Pasca Palmer said, “the UN Biodiversity Conference 2018 will focus on putting biodiversity at the heart of key economic sectors such as energy and mining, infrastructure, manufacturing, and processing as well as health.”

Palmer’s remarks came during her speech in a press conference on Monday, and together with Egypt’s Minister of Environment Yasmine Fouad, she added that “when we speak about biodiversity this means we are speaking about the infrastructure that allows us as humans to live. Biodiversity is about people and development, and the business community does not care very much about the biodiversity.”

She stressed that the conference has numerous benefits for Egypt. Explaining that the preservation of nature will attract more investments and tourism to the country, asserting Egypt’s important role in biodiversity conservation, connectivity, and restoration.

This year, Egypt is set to host the 14th meeting of the Conference of the Parties (COP 14) which will be held in Sharm El-Sheikh, from 17 to 29 November 2018. The conference comes also on the occasion of the 25 anniversary of signing the Convention on Biological Diversity. The COP14 comes under the theme ‘Investing in biodiversity for people and planet.’

The UN official explained further that the conference is the last opportunity for countries to accelerate efforts to meet the 20 global ‘Aichi Biodiversity Targets’ that several governments—including Egypt—committed to, in order to protect nature, by 2020. She added that it will set the path to develop the next global biodiversity plan for the decade 2020-2030.

Moreover, she praised Egypt’s biodiversity conservation efforts, including three important new laws that are currently at different stages of discussion and approval in the Egyptian Parliament. The three laws are the law of protected areas, the law on access and benefit sharing, and the law of biosafety.

During her speech, the Minister of Environment Yasmine Fouad, said that Egypt is the first Arab and African country to host the conference, and a meeting of the African ministers of environment will be held in Cairo on 13 November to address the issues of mutual interest, and biological diversity issues.

According to Fouad, there will be two forums held on the side-lines of the conference, in collaboration with the Ministry of Investment, to discuss the integration of civil society, youth, and investors in the main five sectors: health, energy, infrastructure, mining, and industry, which will be attended by European and Egyptian investors.

Human rights in the spotlight for Euro 2024 host bid