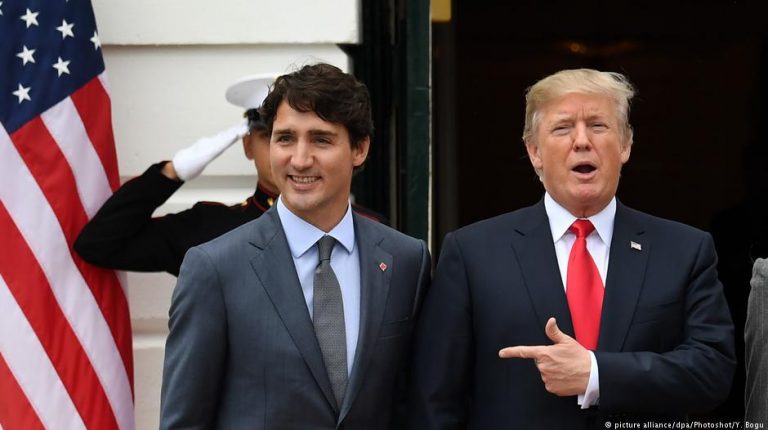 A new North American trade agreement has been struck between the US, Canada and Mexico following tense negotiations. But is this a victory for US President Donald Trump or is the picture a little more nuanced?NAFTA is dead, long live USMCA? It’s not the most inspiring battle cry you’ll ever hear but it neatly sums up the eleventh-hour developments that saw the United States and Canada reach agreement and join Mexico in a new trilateral trade deal on Sunday night.

It’s not “NAFTA 2.0” because that deal is officially no more. The new pact is called the United States-Mexico-Canada Agreement (USMCA), and it came after intense negotiations held over the weekend, by video-link, between Ottawa and Washington.

A US-imposed deadline of midnight on Sunday upped the ante and that urgency appears to have helped secure an agreement which looked far from certain in recent weeks. With the US and Mexico having sorted out their own bilateral issues in August, the revival of a new trilateral pact hinged on the US and Canada finding common ground.

US President Donald Trump and Canadian Prime Minister Justin Trudeau both have lots riding politically on the issue, given the forthcoming elections in both countries. That was evident in their increasingly testy public comments on the matter.

But now that a deal has been done, who will be happiest? And what exactly has changed from the original NAFTA deal, which Trump had been so eager to rip up since the 2016 US presidential election campaign?

When Trump first started his attacks on NAFTA — which he dubbed “one of the worst deals in history” — it was Mexico that bore the brunt of his criticism.

The original NAFTA deal, struck in 1994, had torn down most trade barriers between the three North American countries. While that led to a surge in trade, it also led to criticism that manufacturers would move from the US to Mexico to take advantage of lower labor costs.

Trump had long signaled his intention to tackle Mexico on the subject, particularly in the area of car manufacturing, and Mexico was relatively quick to placate Trump. In August, the country agreed to provisions that would require 40 to 45 percent of a car to be built in countries where workers earn at least $16 (€13.78) an hour to qualify for duty-free benefits — a move aimed at maintaining US manufacturing jobs.

US administration officials also said on Sunday that it was agreed with both Canada and Mexico that there will be no tariffs imposed on car production at existing levels, if ever — something which explains the Mexican side’s happiness with the deal.

A major sticking point in the US-Canada strand of negotiations was the Canadian dairy industry.

Under its so-called “supply management” system, the Canadian dairy market is heavily protected. With the government setting production quotas and milk prices, farmers are provided with a stable income regardless of what is happening in the supermarket. On top of that, Canada has imposed tariffs of up to 275 percent to keep non-Canadian milk products out of its domestic market.

Although, the details are not yet clear, officials involved in the talks say the US has secured greater access to its northern neighbor’s dairy market. This would amount to a significant concession on the part of the Canadians, particularly with elections being held on October 1 in the dairy-producing province of Quebec.

However, there are areas in the USMCA pact that Canada will hail as ‘wins.’ One is the maintenance of a trade dispute settlement system which had been enshrined in the original NAFTA deal.

The US had wanted to scrap it, but Canada successfully insisted on it staying in any new deal. From the Canadian perspective, they see the settlement system as a bulwark against any US attempts to break agreements. For example, the Canadian lumber industry has regularly used it to challenge US activity in that sector.

Another area the Trudeau government will highlight as a win for Ottawa is the continuation of the so-called cultural provisions clause for Canada. Primarily focused on the prevention of Canadian media concerns being bought up by US media giants — especially sensitive in French-speaking regions of the country — it has long been a staple of Canadian political policy.

“It is inconceivable to Canadians that an American network might buy Canadian media affiliates, whether it’s newspapers or TV stations or TV networks,” Trudeau said recently.

The deal also reportedly includes several updated areas, including a new chapter on the environment, which had not been in the previous agreement.

Details remain sketchy and are limited to comments from government officials on either side. But it does appear that all are content with the new agreement, given the positive public comment coming from politicians in the three countries in the hours since news of the deal broke.

“USMCA will give our workers, farmers, ranchers, and businesses a high-standard trade agreement that will result in freer markets, fairer trade and robust economic growth in our region,” said the joint statement issued by the Canadian and US governments. “It will strengthen the middle class, and create good, well-paying jobs and new opportunities for the nearly half billion people who call North America home.”

The deal still requires US congressional approval, which is far from certain, given that it will come before a new Congress following November elections. For now though, it will be sold to American, Canadian and Mexican audiences as good news for all.

Yet as with all trade deals it will only be possible to assess the winners and losers far into the unseen future.