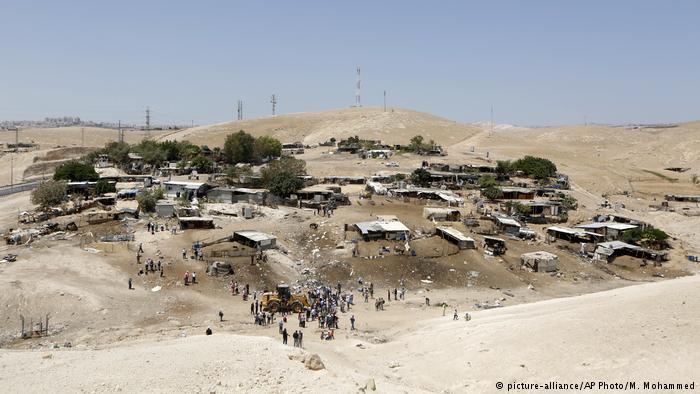 The Israeli military is planning to demolish a West Bank village called Khan Al-Ahmar, and forcibly transfer its residents to make way for Jewish settlements.

In defiance, dozens of Palestinian activists and residents decided to gather and physically block the demolition.

Amnesty International released a statement on Sunday saying the act is “a war crime that lays bare the Israeli government’s callous disregard for the Palestinians.”

The Khan-al Ahmar lies east of Jerusalem and has around 180 residents. According to Palestinian local media, Israeli authorities offered the villagers a choice of two possible destinations, either a site near the former Jerusalem municipal garbage dump, near the village of Abu Dis or a site in the vicinity of a sewage plant close to the city of Jericho.

“After nearly a decade of trying to fight the injustice of this demolition, the residents of Khan Al-Ahmar now approach the devastating day when they will see their home of generations torn down before their eyes,” said Saleh Higazi, deputy director for the Middle East and North Africa at Amnesty International.

“This act is not only heartless and discriminatory; it is illegal. The forcible transfer of the Khan Al-Ahmar community amounts to a war crime. Israel must end its policy of destroying Palestinians’ homes and livelihoods to make way for settlements.”

Israel claims that the village, which is an encampment of corrugated shacks near the Kfar Adumim settlement, was built illegally, with activists countering such arguments saying that it is almost impossible for Palestinians to get building permits.

Israel’s Supreme Court has twice ruled in favour of demolishing the entire village of Khan Al-Ahmar, first on 24 May 2018, and again on 5 September 2018, following a desperate appeal by the residents of the village.

Israeli officials praised the court decision, as the Israeli Defence Minister Avigdor Lieberman praised the judges for what he called a “brave” ruling.

“No one is above the law. No one can stop us from implementing our sovereignty and responsibility as a state,” he was quoted by AFP last week.

Another argument the Israeli government cites is that the buildings that make up the Khan Al-Ahmar encampment, which include an Italian-funded school, “posed a threat to residents because of their proximity to a highway.” The school is constructed from rubber tyres and provides education for 170 children from five different Bedouin communities.

The office of the UN High Commissioner for Human Rights has called late September on Israel to drop its plans and said that the destruction of private property by an occupying power violates international law.

For more than 60 years, members of the village have been struggling to maintain their way of life, Amnesty International said, adding that they have been continually harassed, pressured and resettled by successive Israeli governments.

Since 1967, Israel has forcibly evicted and displaced entire communities and demolished more than 50,000 Palestinian homes and structures.

On 30 September, Amnesty International, alongside Jewish Voice for Peace, launched a Twitter storm targeting the Coordinator of Government Activities in the Territories (COGAT), an Israeli Defence Ministry unit responsible for implementing government policy in Area C of the West Bank.

The Olso Accords split the West Bank into Areas A, B, and C. Area C is temporarily administered by the Israeli Civil Administration (the bureaucratic arm of Israeli Army) but, per the Oslo Accords, the administration of land was to have transferred back to Palestinian control within 18 months after the formation of the Palestinian Legislative Council.

Most of Area C is zoned for Israeli use, and over 400,000 Israelis living in about 130 separate settlements, although this is against international laws of military occupation.

Palestinian communities’ master plans must be approved by the Israeli Civil Administration, or they are at risk of demolition. 108 technically-sound plans have been professionally developed and submitted to the ICA since 2011, but only three have been approved, according to activists.

Plans are rejected for spurious reasons, like the assertion that infrastructure will be impossible to implement. Critics say that is baseless, as Israeli settlements enjoy well-developed modern infrastructure.