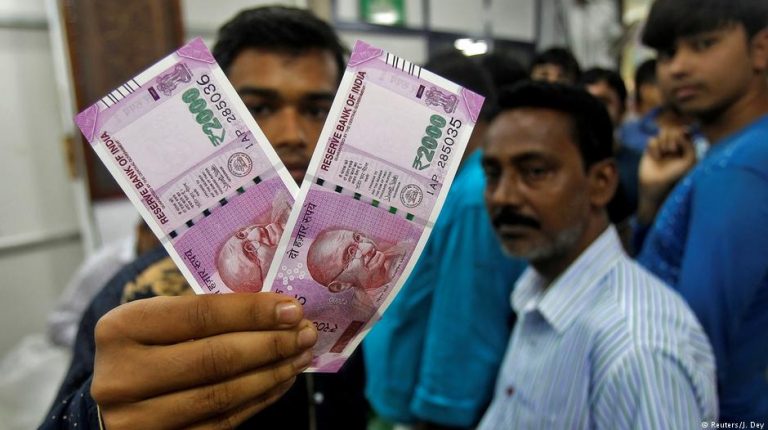 The Indian rupee has turned out to be Asia’s worst-performing currency this year as the nation’s economy struggles with rising oil prices, a widening current account deficit and broader emerging market concerns.The rupee has dropped over 12 percent against the US dollar since the beginning of 2018, earning it the unfortunate distinction of Asia’s worst performing currency this year.

Economists blame rising global crude prices for the slide. India imports 80 percent of its oil needs and soaring prices have blown a hole in the nation’s finances. The country also imports huge quantities of items like gold and electronics, swelling its import bill further.

India’s current account deficit (CAD) will also likely widen to 2.8 percent of GDP in financial year 2018 — up from 1.9 percent last year — according to consultancy Nomura Research. CAD is a measure of the flow of goods, services and investments in and out of the country.

Still, macroeconomic problems resulting from a higher CAD and depreciating rupee are not Prime Minister Narendra Modi’s biggest concerns. His administration is more worried about growing public discontent due to the rise in petrol and diesel prices.

Months ahead of a general election scheduled to take place in April or May 2019, Modi’s government can’t afford to make itself the target of voter anger.

Modi took office over four years ago proclaiming the onset of “the good days.” Economic development and job creation were central to his campaign promises. Modi’s record on this front has been mixed.

If economic development equates to gross domestic product (GDP) growth, then India boasts the title of being the fastest-growing major economy in the world. Its economic output rose by as much as 8.2 percent in the quarter ending June, recent government data showed.

Since it came to power, the Modi government has also introduced some key reforms, including deregulation of gasoline and diesel prices, further opening to foreign investment and greater labor-market flexibility, among other things.

But a deeper look reveals that not all is well in Asia’s third-biggest economy.

For several years now, the nation’s banking sector has been toiling to tackle bad loans. Bad loans held by India’s banks rose to 10.36 trillion rupees ($150.21 billion, €130 billion) at the end of March, according to government figures. State-backed lenders account for more than 86 percent of non-performing loans.

Even though the government and central bank have tried to recapitalize state-run banks, they are still struggling. As a result, banks have been reluctant to lend, stalling private investment.

The agricultural sector is also under strain. Farmers nationwide have regularly taken to the streets to vent their anger over issues like high indebtedness, the rising cost of production and dissatisfaction with government prices for major crops.

Clashes broke out on Delhi’s outskirts on October 2, as police used water cannons and tear gas to stop thousands of protesting farmers entering the Indian capital.

The farmers — reeling from high fuel costs — were demanding higher prices for agricultural goods, free electricity for farms and waivers on loans ahead of next year’s elections.

About 45 percent of India’s workforce is employed in agriculture, so it’s a hot-button issue for voters. However, the sector accounts for just 15 percent of Indian GDP and many economists say India’s economic transformation requires some of the nation’s excess and low-productivity farm labor to shift to well-paid jobs in industry and services.

Read more: Can Ikea make it big in India?

India’s rapid economic expansion, however, is not generating enough opportunities for well-paid, decent jobs for the country’s burgeoning youth population. Around 12 million people enter the workforce every year and the Indian economy needs to create roughly one million jobs each month just to keep up with natural growth in the labor force.

The South Asian nation is creating between 350,000 and 400,000 jobs a month, according to the government’s own estimates.

The central plank of Modi’s strategy to boost industrial growth and create tens of millions of jobs is his flagship “Make in India” drive, aimed at turning the country into a global manufacturing hub.

The response to the program has so far been “lukewarm,” says Jayshree Sengupta, a senior fellow at the Delhi-based Observer Research Foundation’s Economy and Development Program.

Modi has managed to attract some foreign investment into the manufacturing sector, but doesn’t come near China’s success, she pointed out. And the government still has some way to go to reach its target of increasing the share of manufacturing in GDP to 25 percent by 2020. It’s currently at 17 percent.

“The reasons for this failure are high logistics costs, bureaucratic hassles as well as the small pool of skilled workers in the country,” Sengupta told DW. “Only 2 to 3 percent of the Indian workforce has any kind of certification for skill training.”

Despite growing risks to global trade and investment as a result of the US and China’s tit-for-tat tariff tiff and US President Donald Trump’s protectionist rhetoric, Indian officials hope trade tensions will open up new opportunities for India.

“We must closely watch the situation as to when the challenge turns into an opportunity,” Indian Finance Minister Arun Jaitley said recently of global trade disputes.

Still, Modi isn’t averse to protectionist policies himself, despite touting the benefits of free trade and globalization in international fora. Gold, electronic equipment and “non-essential” goods like premium cars have been targeted.

Read more: Are we about to face a new Asian financial crisis?

This protectionist trend has drawn the ire of Trump, as well as Germany’s Ambassador to India Martin Ney, who views increased duties on auto parts as unfair. Observers say the EU may retaliate with higher duties on certain Indian products.

India’s tariffs on auto parts have hit German luxury carmakers like BMW, Audi and Mercedes particularly hard, as these companies import components from elsewhere and then assemble them in India. The tariffs could make these cars more expensive.

“I cannot understand the increase in tariffs,” Ney told German business daily Handelsblatt. “If India has a growth rate of 8 percent and wants to increase its exports, then it must also allow imports into the country.”