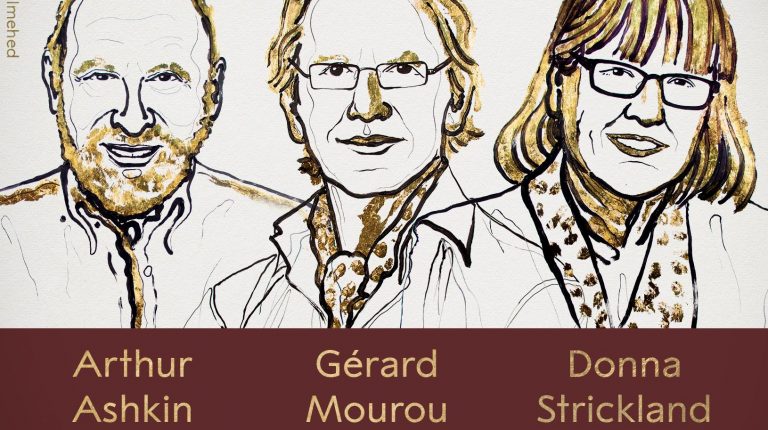 The Royal Swedish Academy of Sciences decided on Tuesday to award the Nobel prize in physics 2018 to American physicist Arthur Ashkin, with one half of the prize, and the other half went jointly to French physicist Gérard Mourou, and American physicist Donna Strickland.

According to the academy’s statement, the three scientists deserved the prize for their “Ground-breaking inventions in the field of laser physics.”

Ashkin deserved one half of the prize “for the optical tweezers and their application to biological systems,” as he invented optical tweezers that grab particles, atoms, and molecules with their laser beam fingers. Viruses, bacteria and other living cells can be held too, examined, and manipulated without being damaged. Ashkin’s optical tweezers have created entirely new opportunities for observing and controlling the machinery of life.

The other half jointly prized shred by Mourou and Strickland was “for their method of generating high-intensity, ultra-short optical pulses.”

Gérard Mourou and Donna Strickland paved the way towards the shortest and most intense laser pulses ever created by humankind.

“The technique they developed opened up new areas of research, and led to broad industrial and medical applications, for example, millions of eye operations are performed every year with the sharpest of laser beams” according to the academy’s statement.

“We need to celebrate women physicists because they are out there… I’m honoured to be one of those women,” said Donna Strickland, who became the third woman to receive the Nobel prize in physics, joining Maria Goeppert-Mayer in 1963, and Marie Curie in 1903.