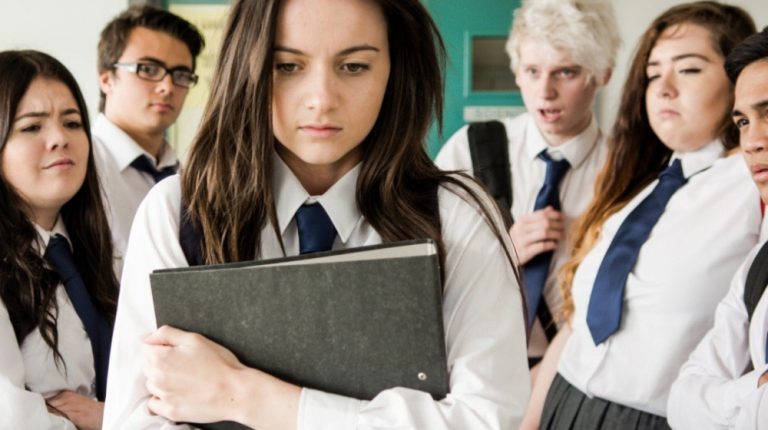 “My voice is not soft and calm like all other girls, but rather rough and strong. I was always judged for this characteristic by all my colleagues at school. Every time I would open my mouth and talk, I would see surprised expressions on their faces,” Mona Emad, 29, said while sharing her school bullying experience and how it affected her.

Emad narrated several situations of bullying for having a low-pitched ‘manly’ voice at different stages in her life, which led her to feel insecure about her voice for a number of years and think of undergoing surgery to improve it. She pointed out that the issue started at school, when her classmates used to single her out for having a different voice than other girls every time she talked.

“I used to hear phrases like, ‘why does your voice sound like this?’ and ‘you have a stronger voice than mine’ or ‘your voice is ugly,’ ‘you scared me’ ‘your voice is disturbing my ears’ or, ‘how you are going to flirt with your future husband with a voice like that?” Emad recalled. The twenty-nine-year-old housewife is among hundreds of people who were exposed to bullying during childhood.

Bullying is experienced by young students on a daily basis, at both private and government schools. Dozens of people grew up believing that they suffer from major flaws because of the comments they heard at school from their teachers and classmates.

Children can be exposed to bullying for wearing glasses, having acne, or for skin colour, body weight or height, clothing, performance level at school, and manner of speech, or pronunciation. They could also be bullied for anything that seems ‘odd’ to others in their appearance or lifestyle.

Emad explained that there was a group of classmates who constantly made fun of her when she spoke. “Sometimes they used to ask me utter certain words so they can laugh. I cried constantly. I reported it to my teacher and she summoned their parents to discuss the issue.”

“I really would have accepted my voice when I was child if other people had done so. I complained many times to my parents to take me to a doctor to ‘fix’ my voice, but they always rejected the idea until I grew up and understood that I am normal, and people are different. Now as an adult, I still hear comments about my voice, but I no longer care,” Emad concluded.

In September, Egypt launched the first national anti-bullying campaign under the supervision of the National Council for Childhood and Motherhood (NCCM), and in partnership with the Ministry of Education, and with the cooperation of the United Nations Children’s Fund (UNICEF), funded by the European Union (EU).

The month-long campaign is expected to end the first week of October, after raising awareness about the harmful impact of bullying, and providing solutions to counter the phenomenon.  The message is being distributed through posts on social media platforms, billboards, and televised advertisements.

The Head of NCCM Azza Al-Ashmawy said in previous comments to Daily News Egypt that the campaign seeks to help children, parents, and teachers to stand against all forms of bullying and violence faced by children in schools.

She added that during her discussions with children regarding the issue, they came up with several ideas, such as having a punishment room for bullies to remain in for a whole week, “in order to be labelled just as they label other children.”

A study by the EU disclosed that the highest level of violence facing children occurs at home, followed by school, with 29-47% of children aged between 13-17-years-old reporting that physical violence among peers was commonplace. The study came according to the latest global data published in 2011, indicating that slightly over 1 in 3 students aged between13-15 around the world experience bullying.

Mohamed Amr, deputy of minster of education told DNE in media statements during a conference, that the ministry has currently started a huge reform plan, and the campaign is a part of it, noting that teachers are a priority of the reform plan.

“We will provide teachers training sessions by foreign experts on advanced education systems, and correct ways of dealing with students. It will take time to see results, but we will continue. Before, people didn’t take it this seriously, but now we will work harder,” Amr said.

“Bullying is not the only issue facing the ministry’s agenda,” he concluded. Teachers also practice violence against students in many cases of bullying. Mohamed Magdy, 32, an entrepreneur, said that his math teacher use to call him “stupid’.

“My teacher used to tell me that I will fail and will never succeed. He was actually the reason why I hated math throughout my primary stage, and was not confident enough to solve any equation,” Magdy also said.

“My father believed the teacher, and he never thought for a minute why I was underperforming in the subject as he always believed that the problem was that I am not studying enough,” added Magdy.

“Ironically, I graduated from the faculty of management, and I have my own business now,” he concluded.

Speaking to Abdel Hafez Tayel, the head of the Egyptian Centre for the Right to Education, on the reasons behind teachers bullying students, he told to DNE that teachers are not well appreciated in Egypt.

“First of all, bullying is a cultural issue. The teacher bullies as result of being pressured by the ministry, as they are working extra hours, while being less paid, and they are not granted fair rights,” Tayel explained.

“Teachers bullying students is a result of what they face from the ministry in the first place,” he urged, saying that when one is comfortable at his workplace, and is being well appreciated, he perform better.

When asked why teachers in private schools also bullying students, Tayel said that it is a transference phenomenon.

Bullying is not only at school

“People are always the ones who make you feel good or bad about your appearance or character. That is why I really believe that there is nothing called a flaw, we are the ones who make them by judging others,” said Sherine Tarek, who was always criticised for her curly hair during her schooldays.

“People around me made me feel bad about my hair. I used to hate my hair although it is a perfect specimen of curly hair. For my entire life I bought products to straighten my hair so I would satisfy people, without ever believing that I have really good hair,” she said

Tarek suffered from insecurity and a bad relationship with her hair due to peoples’ negative comments as it was common among Egyptians that any female who does not having straight hair is not pretty.

“There are several groups on social media giving hints and information for girls on how they could have curly hair, and I found out that there people spending hundreds of pounds just to have their hair like mine. This made me realise that I really have great hair, and looking beautiful has nothing to do with straight hair,” Tarek said.

Moreover, a thirty-year-old female accountant who preferred to speak on condition of anonymity, said that she is unmarried and satisfied, but people’s comments are really disturbing her.

She narrated that few years after graduation her friends all got married. Mostly they all had children. “Whenever we would meet, they would speak about topics that I could not relate to. I would feel I was excluded, and bored. When I would tell them to change the topic so I could join them, they would reply that my topics are trivial for them now, and that their topics are interesting now because they have more responsibilities than me,” she continued.

Also, her friends were always arranging dates for her despite her repeated rejections. “They made me feel incomplete because I was not married like them. I sincerely wished that they would believe that I am really happy and not pretending to be,” she concluded.

Opinion: Let’s just call it by its name — a winnable trade war