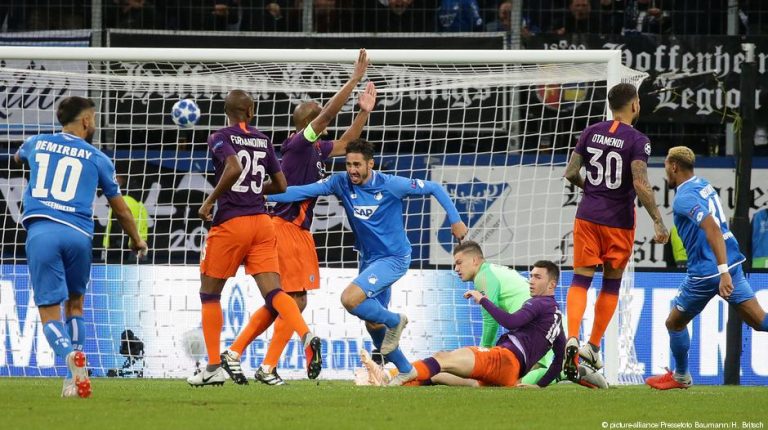 Hoffenheim suffered a defeat most had expected, but still gave a good account of themselves. Bayern Munich, on the other hand, did the complete opposite. What might this mean for Germany’s sides in Europe this season?On paper, Hoffenheim stood little chance against Manchester City. Weakened by a long injury list, notably defenders Kevin Vogt and Benjamin Hübner, and lacking in European experience (this was their home debut in the competition), this looked like an automatic three points for the defending Premier League champions. While Pep Guardiola’s side did get the win, Hoffenheim made them work much harder than expected for it – thanks largely to Julian Nagelsmann, a coach who continues to defy the odds.

After a thrilling opening, the game remained somewhat of an end-to-end affair throughout the opening 45 minutes. Hoffenheim dared to defy City’s stars, while also posing a threat on the break.

Midway through the second half, the home side were fortunate not to concede a penalty when Oliver Baumann underestimated the pace of Leroy Sané, but for the most part Nagelsmann’s charges kept up with the speed of their opponents. Given that Nagelsmann’s defense included non-regular Kevin Akpoguma, young Austrian Stefan Posch (in just his 20th appearance for Hoffenheim) and 20-year-old Dutch defender Justin Hoogma, this was even more impressive. Wingbacks Justin Brenet and Pavel Kaderabek dealt with Raheem Sterling and Leroy Sane admirably and Florian Grillitsch continues to exceed expectations with his development. Had Ishak Belfodil continued to show as much composure later in the game as he’d done after just 43 seconds, Hoffenheim might have had more goals to show for. However, he, along with the returning revelation that Joelinton has become, impressed again.

Collectively Hoffenheim exceeded their individual ability and were very much in this contest – and for that Nagelsmann deserves a great deal of credit. As is so often the case in sports, it was the team with the better individual quality that prevailed in the end – even it sometimes comes down to nothing more than a stroke of luck.

This time, it was young Posch’s desire to take an extra touch before clearing that ended up costing Hoffenheim the point they deserved. Still, Hoffenheim had come close and that deserves recognition.

The quality of Hoffenheim’s performance was accentuated by one that was lacking on the part of Bayern Munich, the Bundesliga team that usually carries the German flag deepest into European competition. While Bayern’s result was better than Hoffenheim’s, there’s a strong case to be made that had it not been for Manuel Neuer, they would have dropped all three points. A young Ajax team missed several good chances as Bayern, after a rousing opening 10 minutes, delivered another display well short of the quality of their individuals.

Clearly the results are what matter, but the performances suggest a great deal of what is to come. Niko Kovac has a wealth of talent to chose from, but recently, at least, he has looked unable to get the best out of it. Julian Nagelsmann consistently has far less talent to work with, but has made a habit of exceeding expectations.

Hope for German teams in Europe?

Much was made in Germany last season of the lackluster performances of every Bundesliga team in Europe, with the exception of Bayern. But while there’s still a long way to go this season, Hoffenheim’s performance this Wednesday night, along with their draw away to Shakhtar, is encouraging. And taking into account Leverkusen’s comeback in Razgad and Frankfurt’s upset over Olympique Marseille, it seems there may just be reason to hope for a few more pleasant German surprises in Europe this season.

The good news for Kovac is that Bayern are still level with Ajax on points in Group E, and there’s still plenty of time in the group stage to get his team firing on all cylinders again.