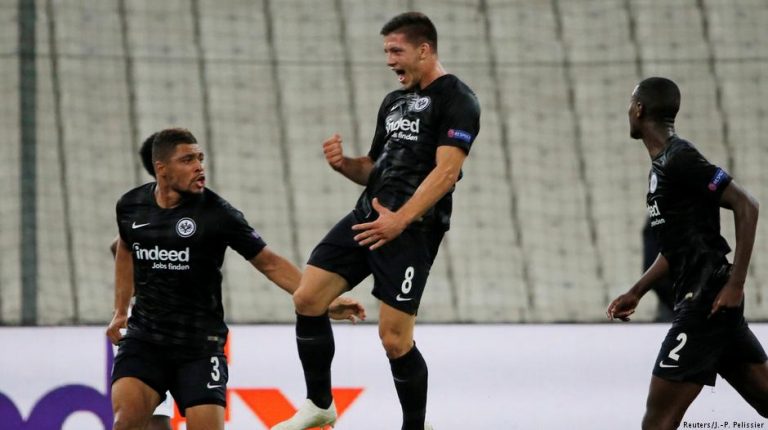 Eintracht Frankfurt are developing a taste for giantkillings and are hunting another scalp as they host Lazio on Thursday. The return of Ante Rebic has been a boost for the Eagles and confidence is high once again.Eintracht Frankfurt qualified for this competition with a shock German Cup win over Bayern Munich and opened it with an unlikely 10-man victory against last season's finalists Marseille.

That 2-1 win extended an impressive run for the Eagles, who have only lost one of their last 14 games in European competition. Domestically things haven't been quite so smooth for Adi Hütter, who took over from Niko Kovac when the Croatian boss joined Bayern Munich.

After a win in his first league match, Hütter's side struggled, taking just a point from their next four games before an Ante Rebic-inspired 4-1 win over Hannover on Sunday took some of the pressure off and secured Hütter a first win at the Commerzbank Arena. The Frankfurt boss thinks home advantage could be key on Thursday.

"It's vital that we do everything we can in front of our home crowd to get something against this strong team," Hütter said on Wednesday. "With this emotion and euphoria behind us, we have to be controlled in our attacking play."

Lazio won't go in to Thursday's game in such high spirits, with the side reeling from a 3-1 defeat against city rivals Roma on Saturday. Frankfurt sporting director Bruno Hübner sees a chance to take control of a tough group.

"We've said we want to progress to the next stage and that wasn't just lip service," he said. "A lot of people sneered at us a bit for saying that, given that we've got two top European teams in our group in Olympique Marseille and Lazio. But we want to fly the flag for German football and want to still be in the competition going into next year."

European football may also be important to Frankfurt's hopes of keeping Ante Rebic. The Croatian forward's profile rose sharply after his cup final display and an impressive World Cup and, after an early season interrupted by injury and fatigue, Rebic has scored twice and provided one assist in 131 minutes this term – Sunday was his first start of the campaign.

"Ante's an exceptional player and we're happy we were able to hold on to him. It was impressive to perform the way he did after such a long time out with injury," said Hubner, while Hütter reported that defender David Abraham is likely to miss out with injury and that he may rotate his squad.

The Italian outfit had a little difficulity seeing off Cypriot side Apollon Limassol in Rome on matchday one and boast one of Europe's most highly regarded central midfielders in Sergej Milinkovic-Savic. At the sharp end, the team seventh in Italy's top flight look to former Borussia Dortmund striker Ciro Immobile. The striker scored 29 Serie A goals for Lazio last season and already has four in seven league games this term.

Leipzig in desperate need, Leverkusen look to bounce back

After impressing in their European debut last season, RB Leipzig got off to a poor start this time around, losing 3-2 to sister club Red Bull Salzburg.

Having played twice as many matches as most clubs at this stage of the season, thanks to their Europa League qualifiers, Leipizig started the season poorly but consecutive wins against Stuttgart and Hoffenheim have them in decent shape for their trip to face Rosenborg in Trondheim, Norway.

Bayer Leverkusen had an even worse start to their campaign, losing their first three league games and trailing 2-0 at halftime to Ludogrets in their Europa League opener. But a Kai Havertz-inspired comeback against the Bulgarians led to a 3-2 win that seemed to have got Leverkusen back on track.

Two wins followed and they took a 2-0 lead against Dortmund on Saturday, before conspiring to lose 4-2. The Werkself now face Cypriot side AEK Larnaca, who lost their first game to FC Zurich. It looks another chance to pick themselves up off the canvas.