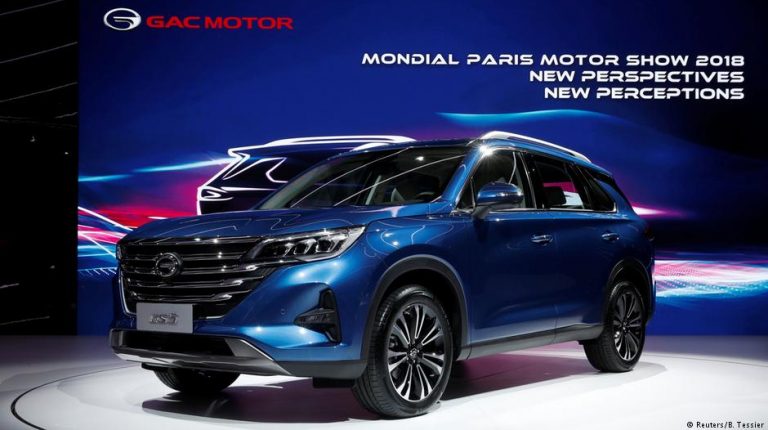 Auto industry executives gathering this week for the Paris Motor Show see plenty of reasons to worry: from global trade tensions to challenges posed by e-cars and stringent emissions targets. Janelle Dumalaon reports.The biennial Paris Motor Show is opening its doors to the public for the 120th time on Thursday. Close to 50 automakers are using the event in the French capital to present their cutting-edge concept cars and compete for the affections of car lovers worldwide.

The Paris Motor Show alternates every year with the Frankfurt Motor Show. And just like its sister event in Germany, it's meant to be a display of might for the global automotive industry. Despite being one of Europe's biggest auto expos, the Paris Motor Show this year seems much smaller than in the past.

A few signs point to the diminished enthusiasm for the show, including the relative ease of finding accommodation near the venue and more space to breathe at the display pavilions, which in years past burst at the seams. Also, faced with reluctance of some industry giants to spend millions of euros on marketing, organizers had to cut back the show's length to just 11 days, from the customary 16.

But perhaps the most telling of all was the absence of 18 brands, including the Volkswagen Group's core brand, as well as Ford, Nissan, Lamborghini and Opel. Motor shows are fighting to stay relevant in the face of a plethora of modern marketing options for carmakers.

But to those who decided to come to Paris, the absence of others could have meant a bigger stage to present their best bets for the future. Indeed, concepts like Renault self-driving luxury lounge EZ Ultimo, and DS' asymmetrical, spacecraft-like X E-Tense did receive their fare share of attention during the press day, alongside updates to older favorites like BMW's new 3 series.

One brand-new automaker even used the Paris Motor Show as its launching pad. VinFast, Vietnam's first major carmaker, unveiled its first ever models in the French capital, the Lux A2.0 and Lux SA2.0, a sedan and an SUV respectively.

The pressing issues of the day, however, made carmakers struggle to sell their visions of tomorrow. The increasing likelihood of a disorderly Brexit wreaking havoc on European supply chains hangs heavy in the air.

Another worry is the still-present fear of US tariffs on European cars, and the challenge mounted by new mobility companies like Waymo and Uber to the traditional car-making business.

Developments over the past couple of days reflect the troubled times faced by global automakers. The German government, for instance, has hammered out a plan to resolve the three-year saga of the diesel emissions cheating scandal, handing carmakers a hefty bill. That's put the likes of BMW in the ironic position of having to defend its diesels from its glittering stand in Paris where the company put its newest e-cars on display.

"For us it's very clear, we have had the cleanest diesels on the market, external studies have proven that," BMW development chief Klaus Fröhlich told DW. "We support software updates, we are also prepared to support the renewal of the fleet, as the German car fleet is one of the oldest in Europe," he said. However, he added, "we do not support hardware updates."

The industry also faces other headwinds. The European parliament on Wednesday agreed to press for a cut in CO2 emissions from new cars and vans by 40 percent by 2030 compared to 2020 levels – a more ambitious target than that sought by the European Commission and the auto industry.

Under proposals put forward by the commission last year, that target would be lowered by 30 percent by 2030. Carmakers have argued that the goal is too ambitious, while environmental groups have pushed for a greater reduction.

The goal set by the EU parliament will still have to be finalized in negotiations with the national governments of member states, which are expected to agree on their negotiating position next week.

But the ambitious reduction goals — even potentially watered down — are enough to worry carmakers, who forecast job losses and major industry disruption as a result.

It's not without irony that the host country for the Paris Motor Show is also one of the EU states seeking deeper reductions. Its capital was one of the first cities where the local government announced an upcoming ban on diesel and petrol cars from its city center. And to Christophe Najdovski, Paris' deputy mayor for transport, replacing those cars with electric vehicles isn't the answer either. To him, it's not just about the kinds of cars, but the cars themselves.

"We have to make the carmakers understand that we can't allow the space for cars that we did in the past," said Najdovski. "We can't do it today. We have to share the public space with other users, like pedestrians and cyclists."

Nobody is debating the continued existence of cars and car shows. But challenges from markets and regulators alike are triggering a rethink across the automotive sector. The Paris Motor Show could well continue for another 120 years. But like the industry itself, it will likely have to change.