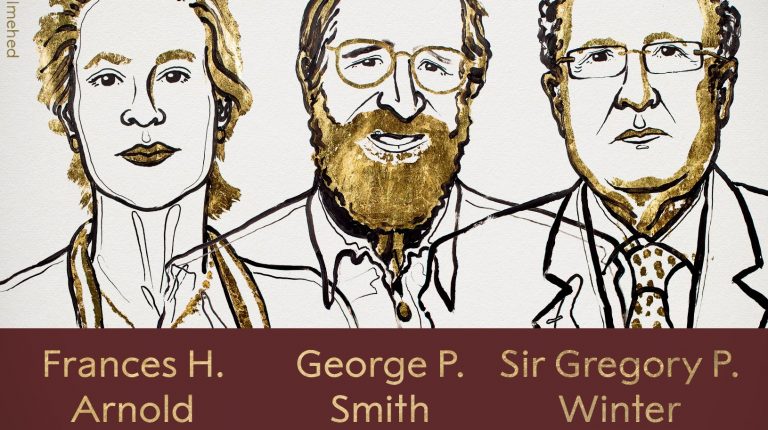 The Royal Swedish Academy of Sciences announced on Wednesday its decision to award the Nobel prize in chemistry 2018 to three scientists in charge of evolution, and employing it for purposes that deliver the greatest benefits to humankind.

According to the statement of the academy, this year’s award went with one half to the American scientist Frances H Arnold “for the directed evolution of enzymes,” while the other half was jointly shared by American George P Smith, and British Sir Gregory P Winter “for the phage display of peptides, and antibodies.”

According to the statement, the methods that the 2018 Nobel prize laureates have developed are currently being internationally developed to promote a greener chemical industry, produce new materials, manufacture sustainable biofuels, mitigate disease, and save lives.

Frances Arnold, who won half of the 2018 prize, conducted the first directed evolution of enzymes, which are proteins that catalyse chemical reactions. Enzymes produced through directed evolution are used to manufacture everything from biofuels to pharmaceuticals. Arnold is the fourth female scientist to be awarded the Nobel prize in chemistry.

George Smith deserved the quarter of the prize in chemistry for his work, and method, which, in 1985, resulted in developing a method known as phage display, where a bacteriophage—a virus that infects bacteria—can be used to evolve new proteins.

The other quarter of the prize went to Sir Gregory Winter, for his efforts in using phage display to produce new pharmaceuticals. Today phage display has produced antibodies that can neutralise toxins, counteract autoimmune diseases, and cure metastatic cancer. The first antibody based on this method, adalimumab, was approved in 2002, and is used for rheumatoid arthritis, psoriasis, and inflammatory bowel diseases.

Professor Ahmed Zewail is the first and only Egyptian and Arab scientist to be awarded the Nobel prize in chemistry. In 1999, Zewail, who was working in the California Institute of Technology (Caltech), in the United States (US), won the prize for his studies of the transition states of chemical reactions using femtosecond spectroscopy.

Facts about Nobel Prize in Chemistry: