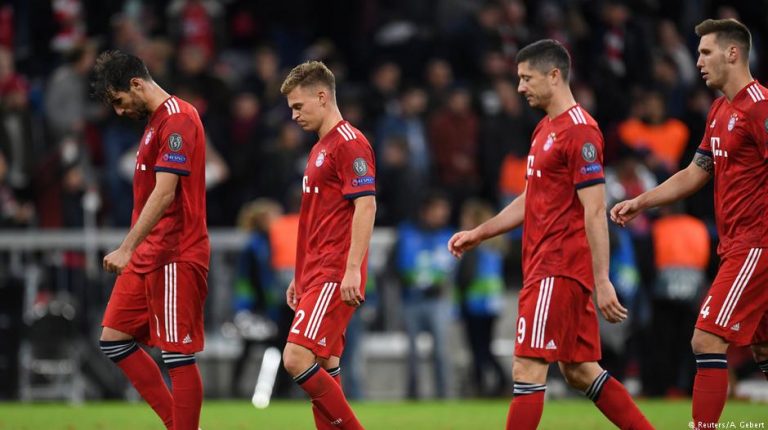 Niko Kovac’s side don’t want to go into the international break with another negative result on Saturday. Things don’t look right in Munich but a stretched Gladbach might struggle to compete with the champions.Going without a win in three games across all competitions is a rarity for Bayern Munich. They are, in a sense, lucky to have a home game against injury-hit Borussia Mönchengladbach on Saturday as they try to bounce back.

With the international break looming, Niko Kovac will be especially desperate to get back to winning ways. Further negativity could fester for another two weeks with no club games if it's not nipped in the bud now.

The law of averages says Bayern will click in attack after misfiring in the 1-1 draw with Augsburg, 2-0 loss at Hertha Berlin and 1-1 Champions League home draw with Ajax.

Robert Lewandowski, rested against Augsburg, fired blanks against Hertha and Ajax but the Poland striker has a scoring rate of 0.69 goals per Bundesliga game – meaning the next one is unlikely to be too far away.

Bayern's midfield puzzle is less easy to solve. The team are still getting used to not having the rampaging Arturo Vidal covering every blade of grass. While Renato Sanches has shown signs of recovering his 2016 form and Leon Goretzka has made a decent start to his Bayern career, neither are yet entirely capable of filling the Chilean's shoes.

Thiago is the closest Bayern have to consistent dynamism in the middle of the park but he needs to do more. Urgency from the team generally has been lacking in the last three games.

Boateng out of sorts

The wings are a bugbear for all Bayern fans. Arjen Robben and Franck Ribery have been great servants but age is beginning to wear them down. Kingsley Coman is injured while Serge Gnabry is still finding his feet at Bayern and in any case is not a winger in the mold of the veteran pair, the same applies to Thomas Müller and James Rodriguez.

But the big issue Kovac needs to fix for the Gladbach game is at the back. Jerome Boateng, perhaps with his thoughts still drifting to Paris, conceded the penalty against Hertha with a lazy tackle and just looks out of sorts. He was partly at fault for Ajax's equalizer on Tuesday too. If Niklas Süle is the future then Gladbach is the sort of game for him to show he can now be first choice alongside Mats Hummels.

The reason Süle can dominate against Gladbach is their lack of height and strength upfront. Alassane Plea has made very strong start to his Bundesliga career with 4 goals but at just 1.80 metres, Süle (1.95m) towers over him.

Raffael missed the 2-2 draw at Wolfsburg last week with injury and is again out while Lars Stindl will not start at Bayern after his long layoff with an serious ankle injury.

Even when fit, the pair are not your usual number 9s – a problem Gladbach have had for years. Plea could be the answer and if Kovac opts for Boateng, the French striker may profit once again.

"Bayern have lost a little of the rhythm they had at the start of the season, but assuming that they will be off the pace would be fatal," Gladbach coach Dieter Hecking told a news conference.

"I'm happy to have Stindl. I think he'll be at 100 percent again after the international break. He could play a role at some point on Saturday, but it would only be in the second half."

— Borussia Dortmund vs. Augsburg: Lucien Favre could not have believed his side would look so good so early. The new players have bedded in straight away and Augsburg may fear a hiding despite their 4-1 win over Freiburg last weekend. Christian Pulisic, Marcel Schmelzer und Shinji Kagawa missed Dortmund's midweek Champions League win over Monaco through injury but Favre has enough options, so much so that Mario Götze does not currently merit a place in the team fit or not.

— Hanover vs. Stuttgart: The hosts are the only team in the league yet to record a win and Andre Breitenreiter will be nervously looking over his shoulder if they are still winless during the international break. Stuttgart boss Tayfun Korkut got his first victory of the season last weekend and would love to get one over his former club.

— Fortuna Dusseldorf vs. Schalke: Two wins on the bounce in all competitions has lifted the cloud over Schalke but an awkward game at promoted Dusseldorf is not ideal with the hosts battling to avoid a third straight defeat. Domenico Tedesco has rotated heavily in their two victories so his lineup is anyone's guess. Goalkeeper Ralf Fährmann looks safe though.