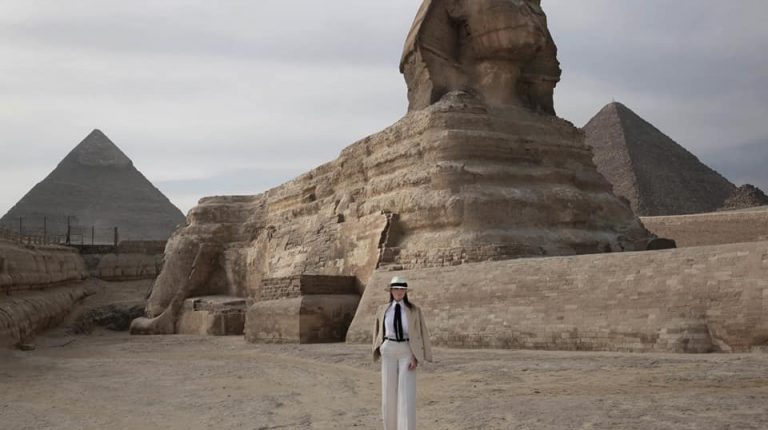 Egypt’s Antiquities and Tourism Ministers Khaled El-Anany and Rania Al-Mashat welcomed the US first lady Melania Trump for a tour around the Pyramids of Giza on Saturday, as a part of her visit to Egypt, concluding her four-country tour in the African continent.

For an hour, she roamed around the Great pyramids of Giza, and the Sphinx. Throughout the tour, she was introduced to the project which aims to lower the groundwater table to safe levels, supported and funded by the USAID.

Mostafa Waziri, secretary general of the Supreme Council of Antiquities, also described to the first lady the Sphinx’s restoration process, while explaining its history.

Melania visited the Great Pyramid of Giza—Pyramid of Khufu—as a part of her tour, in which she roamed inside the pyramid to discover the ancient Egyptian civilisation.

From her side, the first lady praised the reception and hospitality she received in Egypt.

The visit aimed to discuss the bilateral cooperation between the two countries, and the role USAID plays in enhancing various sectors in Egypt, including tourism, and health.