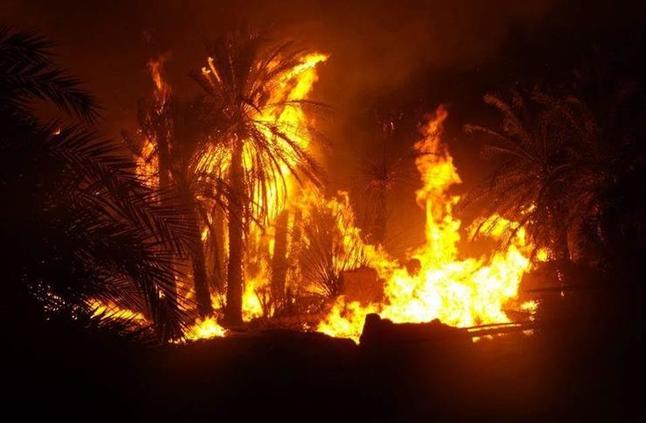 A high state of emergency has been declared in El-Rashda in the New Valley governorate, after a huge fire broke out in three areas in the village, burning palm plantations, and injuring at least 37 people.

The fire, which affected around 100-feddan of palm plantations in the village, according to New Valley Governor Mohamed El-Zamlout, was fought by the armed forces’ air force helicopters, and a dozen fire trucks.

There were reports of any deaths however. The injured were reported to suffer from smoke inhalation, and minor burns.

On Saturday, Mohamed El-Zamlout held a meeting with locals, a number of NGOs, representatives and members of parliament, to discuss upcoming efforts to avoid such incidents in the future, state agency MENA reported.

He called on concerned officials to pay compensations for affected locals, noting that Minister of Environment, Yasmin Fouad, has ordered providing the governate with 15 machines and tractors to remove burnt palms, MENA added.

Meanwhile, Minister of Social Solidarity, Ghada Waly, has decreed to pay compensations for families affected by the fire, once the committee formed, to survey the damages, finishes its work.

Over the past two days, videos and photos of the huge fire were circulated by social media users. A hashtag dubbed “El-Wady El-Gedid (the New Valley)” was also trending on Twitter.