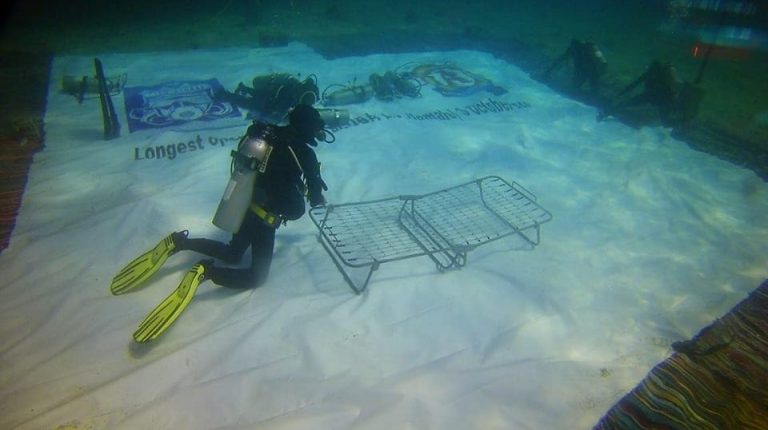 For two days and 5 hours, 14-year-old Reem Ashraf stayed underwater, to break the world record of the longest open saltwater scuba dive, previously scored by a female American diver, Cristi Quill. Ashraf broke the record on Friday, by staying underwater for 56 hours and 25 minutes, in the Gulf of Aqaba, in Sharm El-Sheikh.

Despite that, Ashraf is not listed in the Guinness World Records book, as she was rejected due to her young age.

Reem’s father told local media outlets on Friday that the Guinness World Records refused to register his daughter in the competition at first, as it is required that any participant must be above the age of 16.

He added that later Reem was approved to participate in the competition only under the supervision of Guinness, which she refused, asserting that he is to file a lawsuit against Guinness for not listing his daughter’s achievement in their records.

The young girl started the journey on Wednesday morning, to get out of the sea on Friday.

In the application form, she published on her official Facebook page, Ashraf wrote that she has been preparing for two years for such a competition.

She said that such an achievement at her age is to ‘break the frustration barrier of frustration.”

In addition to the application, Ahsraf posted the approval e-mail she received earlier from Guinness to participate at the title of the world’s longest open saltwater scuba dive for females.

Despite that, the record of the Guinness Longest open saltwater scuba dive for females is still—at the time of print— registered under the name of Cristi Quill, who dived for 51 hours and 26 minutes at La Jolla Shores in San Diego, California.

After completing her dive, Ashraf told local media outlets that her victory is a gift for all Egyptians in the memory of 6th of October.

She said in an interview that the longest time she had slept while being underwater was four hours.

“I spent my time reading, drawing, and playing ping pong,” she said in a phone call to the privatively owned TV channel CBC extra.

Reem and her family moved to Sharm El-Sheikh two years ago in order to for Reem to practice diving. She stated that her passion for diving started at a young age, as she was inspired by her father, who works as an officer in the navy.