The Egyptian automotive market witnessed a slight price shift for most car brands for the second month in a row, estimated at EGP 2,000 – 50,000. It includes several BMW models, Kia, Mercedes Benz, Chery, and Hyundai.

Meanwhile, Opel, Ford, and Renault have barely seen any price changes since they have altered their prices just a few months ago. It came after the end of the Automech Formula exhibition held late September, during which several companies featured their new models, and withdrew others.

During the Automech Formula, Toyota presented its Camry to the Egyptian market in one price category, but with a very hefty price tag of EGP 2.05m. However, Egyptians working in the Gulf single out the Camry for being a medium, reliable, and cheap car.

Ghabbour Group launched a new version of Emgrand 7 under the name Imperial, in one price category: EGP 285,000. The company announced opening its doors for receiving pre-orders with a deposit of EGP 500, providing that the deliveries will be in November.

Imperial is powered by the same 4-cylinder, 1,500 cc engine with 102hp, but it is linked to a continuously variable transmission (CVT) system. The engine consumes 7.2 litres of fuel per 100 km.

The Emgrand X7’s price has seen an increase of EGP 20,000 last month, up to EGP 315,000. This model comes in one category,y equipped with a turbine engine, and an automatic transmission.

Renault models’ prices steadied for the third consecutive month, after being changed in July by adding EGP 3,000 on the prices of several models. The price of the Logan starts at EGP 190,000, while the Sandero Stepway at EGP 255,000. Other models’ prices remained unchanged.

During the Automech Formula, Renault introduced the Zoe, which costs EGP 380,000 abroad (€18,500). The company, however, did not reveal when the car will enter the local market, or its official price here.

This month saw Mitsubishi’s prices unchanged. Last month, however, the Japanese company added EGP 5,000 on the prices of all Lancer’s classes. The Xpander’s prices also witnessed an increase in both its categories, up to EGP 375,000, and EGP 399,000. This was the second car to be introduced in Egypt following the Eclipse, whose price has increased in July, to reach EGP 440,000 in its first class, EGP 495,000 in the third, EGP 555,000 in the fourth, and EGP 575,000 in the fifth, and highest class. The price of the second class remained unchanged.

All the prices of Nissan Sunny increased slightly in the last month. The car’s first class’s price increased by EGP 4,000 to reach EGP 219,000, the second class by EGP 3,000 to record EGP 230,000, the third class by EGP 4,000 to reach EGP 241,000, while other Nissan models’ prices were unchanged. The Nissan Patrol was introduced during the Automech Formula at EGP 3.7m, to become one of the 10 most expensive models in the exhibition. 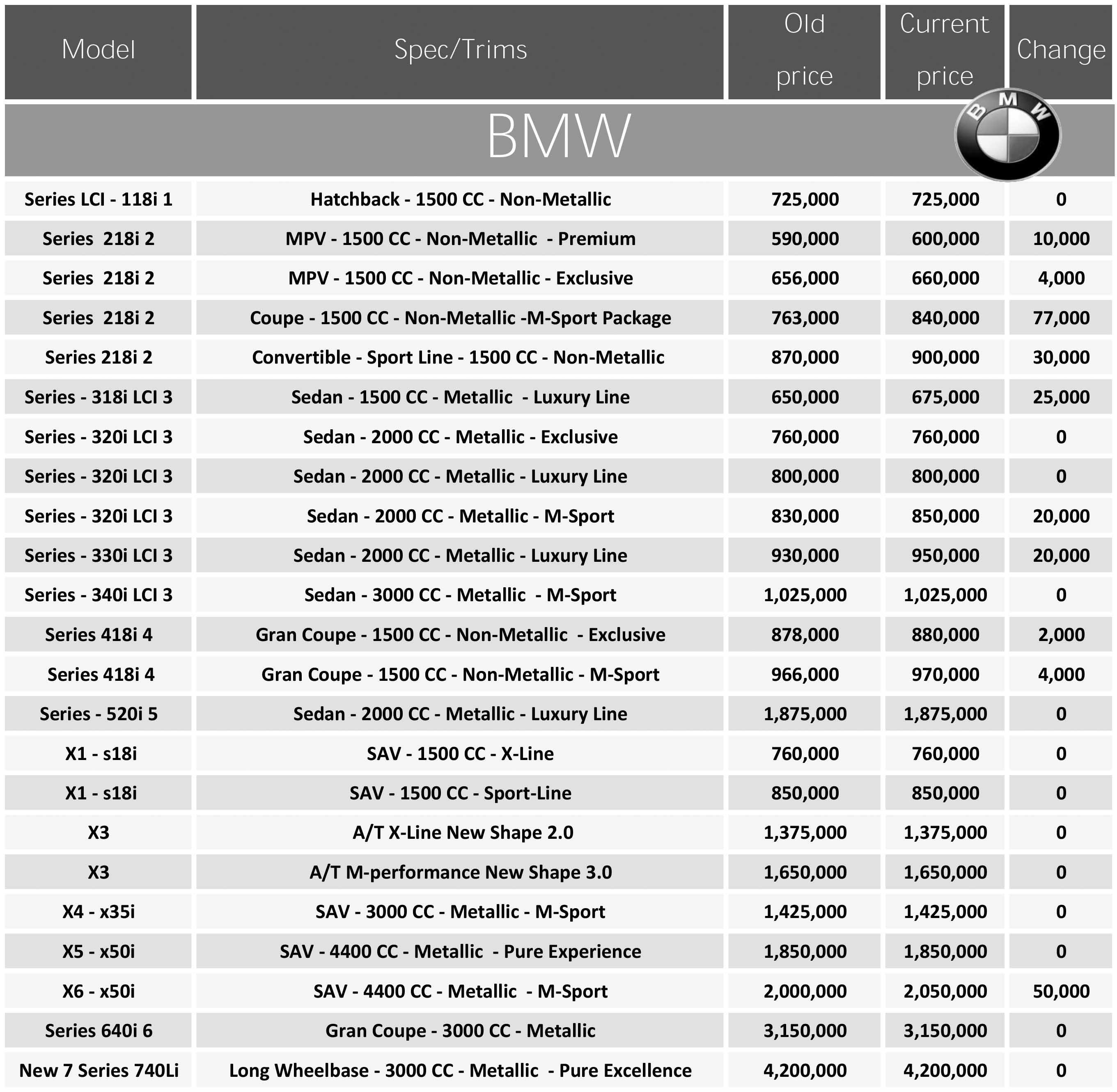 BMW saw an increase in the prices of most of its models for the second month in a row. The increase ranged between EGP 2,000 and EGP 77,000.

Last month, BMW increased the price of all X3’s classes: X3 30i X-line priced at EGP 1.375m, and X3 M40i reached EGP 1.65m. The BMW 8 series is expected to also witness an increase in its prices, after being exhibited at the Automech Formula last month.

Prices of all Chevrolet models in Egypt remained unchanged for the second consecutive month. The last increase was in August, when the company added EGP 3,000 on the price of the Lanos, and EGP 2,000 on the second class of the Aveo. Chevrolet will soon announce the prices of its brand-new Malibu, expected to be released in the Egyptian market in the coming period.