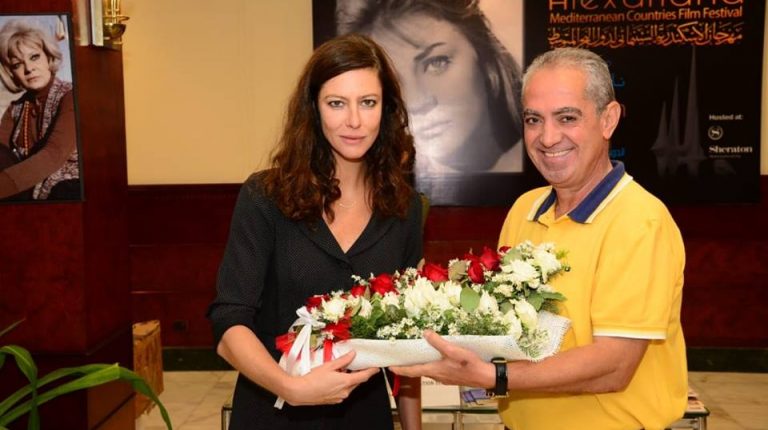 French actress Anna Mouglalis was honoured on Sunday by The Alexandria Film Festival (AFF) for Mediterranean Countries for her role in French and international cinema.

Mouglalis was born in Nantes to a French mother and Greek father. Until 2001, Mouglalis studied at the Conservatoire National Supérieur d’Art Dramatique de Paris (CNSAD). In 1997, she had begun her acting career in La Nuit du Titanic, played in Paris. In the same year, she was chosen by Francis Girod for the film Terminal. In 2000 she co-starred with Isabelle Huppert in Claude Chabrol’s Merci pour le Chocolat.

After appearing in Novo (2002) by Jean Pierre Limosin, she was cast by Roberto Andò for the thriller Strange Crime (2004). In 2003, she played in La Maladie de la mort, a film in black and white by first-time director Asa Mader, which was previewed at the Venice Film Festival. In this same year, she co-starred in a Greek film, called Real Life, directed by Panos Koutras. In 2005 she took part in two Italian movies: Romanzo criminale, directed by Michele Placido, and Mare Buio (The Dark Sea), where she was featured alongside Italian actor, Luigi Lo Cascio.

Mouglalis was cast as Coco Chanel in the 2009 film Coco Chanel & Igor Stravinsky, directed by Jan Kounen. The film was chosen to close the 2009 Cannes Film Festival.

Along with her career as an actress, Mouglalis began a successful modelling career. In 2002 she was chosen by Karl Lagerfeld for the ad campaign for the Amateur Allure – Perfumes Chanel.

Model shift: Could older be the new black?