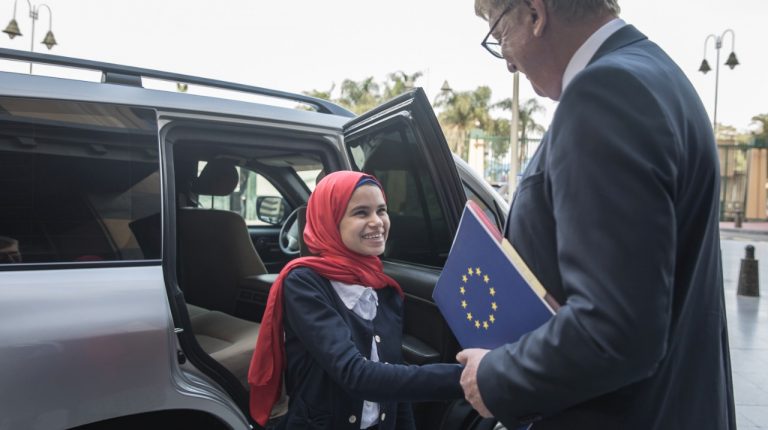 On the occasion of the International Day of the Girl, the European Union (EU) Delegation to Egypt participated on Tuesday, in the ‘Girls Takeover Initiative’ by inviting 17-year-old high school student, Amal Nageh, to represent the EU in Egypt for one day.

The initiative is facilitated by the Canadian embassy and Plan International, according to a Tuesday statement, adding that Nageh is a well-rounded, self-confident, effective and positive change maker in her community. She has been vocal about girls’ rights in Egypt, and has participated in several activities in that respect.

During the day, Nageh and Head of the EU Delegation Ambassador Surkoš visited the National Council for Childhood and Motherhood (NCCM), where they toured the EU-funded child helpline centre. They also learned about the cooperation between the EU and the NCCM.

“Egypt’s young population is one of the nation’s most valuable assets. Taking into consideration that the majority of the Egyptian population is young, with almost half of them females, we could realise the importance of empowering young women and girls,” said Surkoš.

The EU has allocated more than €200m since 2010 for bilateral programmes with Egypt to support gender equality, and promote child rights. €150m of the EU support specifically targeted child rights, with attention to gender aspects, including girls’ protection from all sources of violence, as well as providing girls with leadership skills.

Surkoš highlighted the longstanding cooperation between the EU and the NCCM, stating that both partners have worked together for over 10 years on important issues, such as girls’ rights, including raising awareness on early marriage, female genital mutilation, in addition to supporting girls’ access to education.

Reinhard Grindel’s future as DFB president: Hanging by a thread