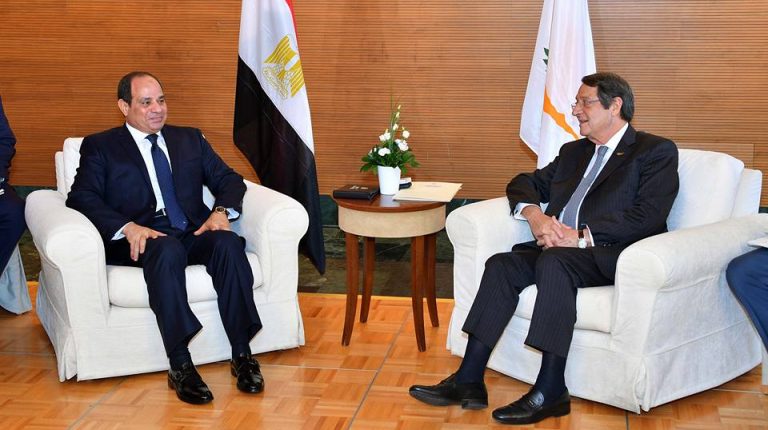 Both leaders discussed bilateral cooperation, especially in fields of energy, investment, and tourism.

The meeting also tackled international and regional issues of common interest, including countering terrorism and illegal immigration, recent updates in the region, and possible ways of reviving peace process between Palestinians, and Israelis.

Furthermore, Al-Sisi met with the Cypriot president Nicos Anastasiades, and both emphasised the significance of enhancing bilateral cooperation, and proceeding with implementing joint projects which they approved earlier.

Anastasiades said that Egypt has played a role in countering the illegal immigration and the constant flow of refugees streaming from crises across the region. During previous summits, illegal immigration was on top of the agenda, as the three countries vowed to counter the phenomenon, suggesting two approaches. First, the boost of socio-economic growth for better opportunities. Second, combating different networks of smugglers.

Earlier in September, Egypt and Cyprus concluded a deal on establishing an underwater gas pipeline between the two countries, which is meant to allow natural gas from Cyprus’ Aphrodite field, estimated to contain around 4.5tn cubic feet (130bn cubic meters) of gas, into Egypt, and will find its way after that into Europe.

The pipeline is supposed to cost between $800m and $bn according to Egyptian Petroleum Minister Tarek El-Molla.

Al-Sisi headed to Crete to take part in the sixth Greece-Cyprus-Egypt trilateral summit, which aims to boost trade and economic cooperation between the three countries, as well as enhance political consultation to confront challenges facing the Middle East, and the Eastern Mediterranean region.