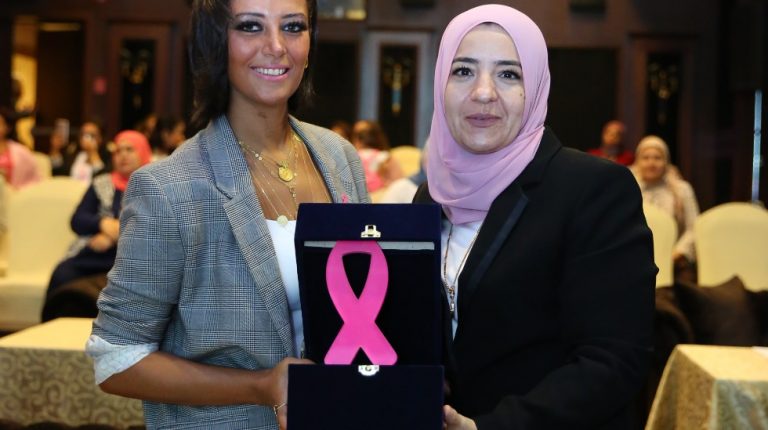 The event took place at the Royal Maxim Palace Kempinski, where tens of ‘female fighters’ gathered to share their stories of combating the illness they once thought would end their lives.

The event also witnessed the honouring of Yasmine Gheith, a young Egyptian actress, and a breast cancer survivor, as well as one of the social influencers raising breast cancer awareness.

As a part of her speech, Ghaith recalled the moment when she found a lump in her breast, “the moment I felt it, I knew right away it was cancer. I headed directly to the doctor, who admitted me an hour later to surgery,” she said.

Gaith stated that for months, like millions of other cancer patients, she believed that she only has a few remaining days to live, “I was young, a mother of a little child, and an energetic person with hundreds of friends. I could not help but ask God why?!.” she remembered tearfully.

Through her social media posts, and her most famous role as a cancer patient in the Egyptian hit drama “Halawet El-Donia” (The Sweetness of the Life), Gaith tells people that having cancer is not the end of the world.