The Intergovernmental Panel on Climate Change’s (IPCC), on Monday urged in a report, the international community to take rapid steps to counter climate change, and its expected impacts. Climate change represents an urgent, and potentially irreversible threat, to human societies and the planet.

Human-induced warming has already reached about 1C above pre-industrial levels—referring to the period of time before the start of the industrial revolution—and by the decade 2006–2015, human activity had warmed the world by 0.87C, compared to pre-industrial times (1850–1900), the report read. It also urged that if the current warming rate continues, the world would reach human–induced global warming of 1.5C around 2040. 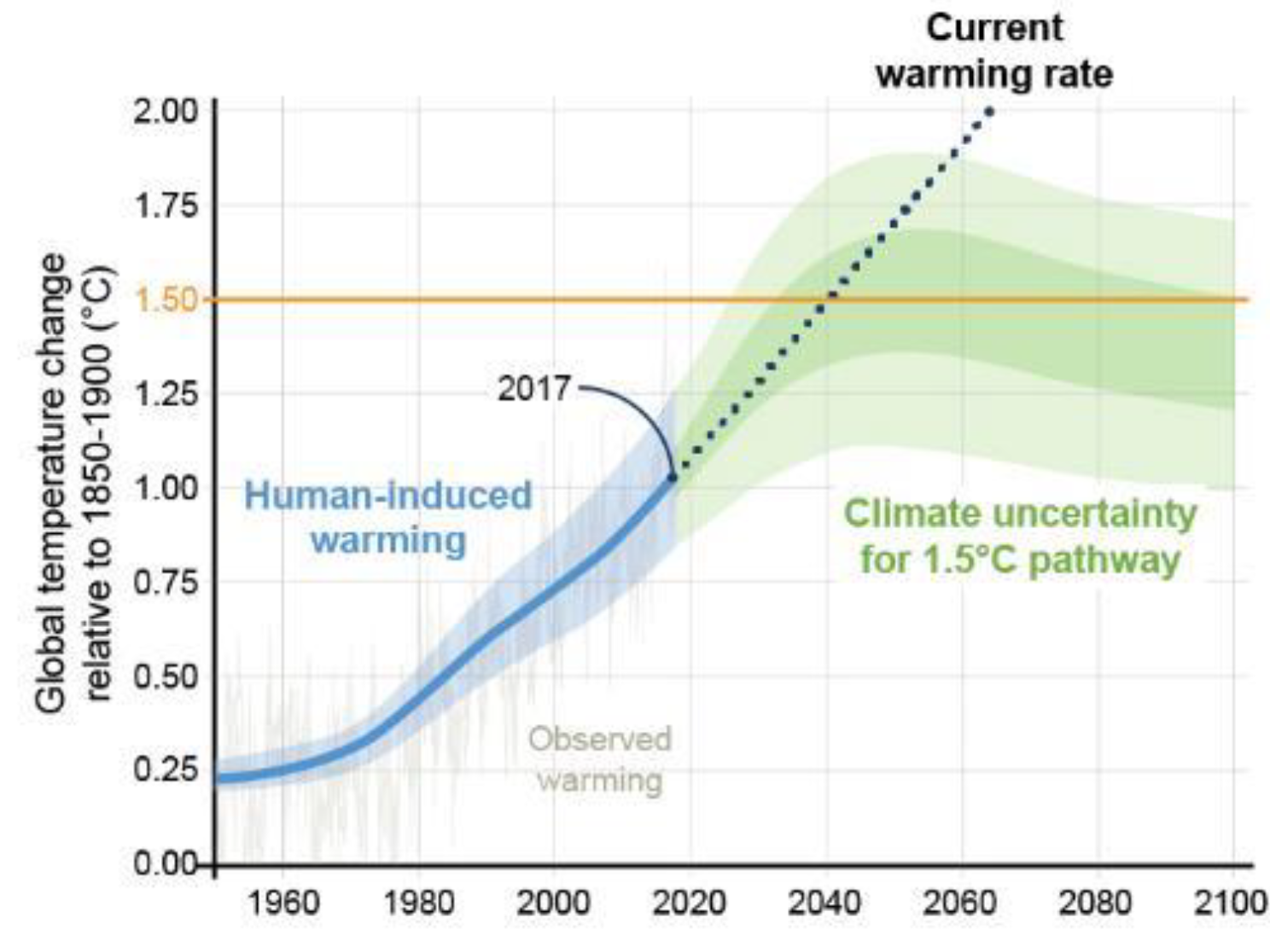 The report, which took three years to be prepared, addressed the impacts of global warming of 1.5C above pre-industrial levels, and related global greenhouse gas emission pathways, within the context of strengthening the global response to the threat of climate change, sustainable development, and efforts to eradicate poverty.

According to the report, the way to limiting global warming to 1.5C is estimated to involve the annual average investment needs in the energy system of around $2.4tn between 2016 and 2035, representing about 2.5% of the world’s GDP.

“All pathways that limit global warming to 1.5C, with limited or no overshoot, project the use of carbon dioxide removal (CDR),” according to the report. “CDR deployment of several hundreds of [gigatonnes of CO2] is subject to multiple feasibility, and sustainability constraints.”

Egypt is a typical example of a developing country that is highly vulnerable to the phenomenon, facing numerous threats to its economic, social, and environmental sustainability, according to a study by the World Resources Institute. That puts the Egyptian authorities under the pressure of taking measures to combat climate change, and take part in international efforts to limit temperature rise by 2100 to less than 1.5C, in accordance with the Paris Agreement.

Ghanem suggested that chemical fertilisers should be replaced by organic fertilisers, as well as preventing the accumulation of wastes that cause methane emissions.

He further explained that organic fertilisers serve as a stockpile which keep CO2 in the soil, and prevent CO2 emissions from reaching the atmosphere. Ghanem also called for more urban green spaces, and green belts around the cities, reducing our reliance on fossil fuels, to be replaced by renewable energy. Also, on our path to reach the warming limit of 1.5C, we need to fully eliminate our emissions of the main causes of warming: carbon-dioxide, according to Joeri Rogelj, from the International Institute for Applied Systems Analysis (IIASA). He informed DNE that “this means that global carbon-dioxide emissions have to be brought to zero levels. This does not mean that no carbon-dioxide is produced at all. However, it means that we need to actively remove as much carbon-dioxide from the atmosphere as we are putting into it.”

Rogelj, who is one of the authors of the IPCC report, said that there are various ways and strategies to achieve this goal. “Two aspects that jump out, are the need for reaching zero global carbon-dioxide emissions by roughly mid-century, and to strongly limit energy demand by adopting efficient. and sustainable lifestyles,” he said.

“Pollution today causes more victims than World War II, as vair pollution accounts for more than half— or 92% of the world population suffer from air pollution, and economic loss each year is equivalent to the GDP of Japan! Climate warming, and air pollution are twins, with multi-faceted interlinkages. It could also provide the opportunity to achieve co-benefits, through initiatives such as the ‘Clean Air and Climate Coalition’,” Jian Liu, chief scientist at UN environment, stated at the opening of the 48th session of the IPCC.

According to a recent paper published in Nature Climate Change journal, all of the successful scenarios for limiting the world warming include a rapid shift away from fossil fuel use, towards low-carbon energy sources, decreased energy use, and the removal of CO2. Strong social and economic inequalities, a focus on continued high fossil-fuel use, and poor short-term climate policies, emerged as key barriers to achieving the 1.5C goal. 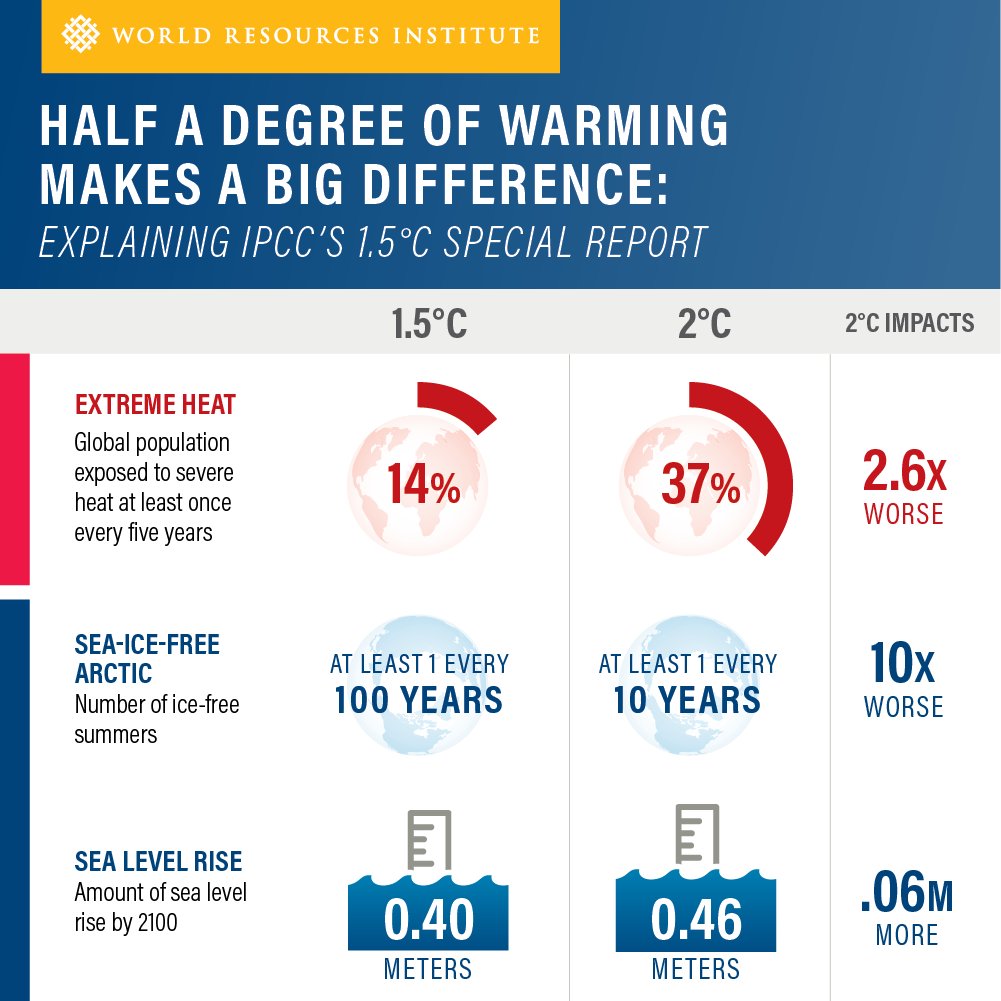 One of the most effective natural solutions for reaching the 1.5C goal is urban green spaces that help in controlling floods and storing carbon, according to a recent study published in the journal of Ecosystem Applications. Findings of the study indicate that urban green spaces play a significant role in providing some ecosystem services. Public parks, and people’s yards, store substantially more carbon in their soils, than urban forests or grasslands.

The Nature Climate Change paper clarifies that urban forests and grasslands, have a big impact on flood control, allowing water to infiltrate into the soil, instead of simply running off into streets, or storm sewers.

In this regard, Egypt started planting several greenwoods, in different places and governorates, using the sewage water over 1m feddan, using about 6bn sqm of water in Luxor, Beni Suef, Qena, and Dakahlia governorates.

Diarmid Campbell-Lendrum, team leader at the World Health Organisation (WHO) Climate Change and Health Unit, and co-author of the 1.5C health report, said that the report makes clear that the lower the warming, the safer it is for health, explaining that  “as we pass 1.5C, 2C, or even higher, the risks to health multiply.”

According to Campbell-Lendrum, the report also clarifies that there are big benefits from the measures we need to stay below 1.5C warming.  The faster we cut emissions of carbon into the atmosphere, the more lives we can save from reducing air pollution, which currently causes 1 in 8 deaths globally.

“The path that we take to stay under 1.5C is important. People are more likely to support actions that also give us cleaner air, greener and more liveable cities, healthier, and more sustainable diets,” Campbell-Lendrum added.

Lead author of the IPCC special report on 1.5C, and co-author of the health report, Kristie Ebi, said that “mitigation pathways, consistent with keeping warming to 1.5C, are expected to have robust synergies for public health, particularly for mitigation options focused on energy supply, and demand.”

“There is an urgent need to increase the level of adaptation ambition, over the next couple of decades. Even with rapid mitigation, the world is projected to warm an additional 0.5C, between 2030 and 2052. Without additional adaptation, this temperature change is expected to have widespread and significant negative consequences for human health, disproportionately affecting the poor and disadvantaged, even under a mitigation pathway to keep warming below 1.5C,” according to Ebi.

In his view, Ebi believes that health systems need to rapidly increase their transition to climate resiliency, to manage projected reductions in food quality and security, increases in water stress, increases in the magnitude and frequency of selected extreme weather and climate events, increases in the geographic range of malaria and dengue, and changes in the burdens of other climate-sensitive health outcomes. He also said that the IPCC report underscores the need for increased ambitions for adaptation, and mitigation.

For his part, Arthur Wyns, external reviewer of the IPCC report and co-author of the 1.5 Health Report stressed that “the IPCC special report on 1.5C shows that that the greater the warming, the greater the risks to health overall. It proves that there can be important health gains from the actions that will be necessary to limit warming.”

Wyns who is also an activist in climate change issues, added that the report shows that the speed of reducing emissions will influence how much, and how fast, we will all have to adapt to a changing climate. “But ultimately, the report supports a positive vision of a world which safeguards the climate—and is a safer, and healthier place to live,” he said.

Anne Stauffer, director for Strategy and Campaigns at the Health and Environment Alliance (HEAL) said that “climate action is all about opportunities for health: decarbonising our lives is entirely possible, and will make this world a healthier, more prosperous, and sustainable place.” Stauffer added that “ensuring a limit of 1.5C instead of 2, would mean less health-threatening extreme weather events, chronically ill people, less hospital admissions, less deaths, and less financial burdens on our societies.”

Opinion: 1.5 degrees — do we want climate catastrophe or not?