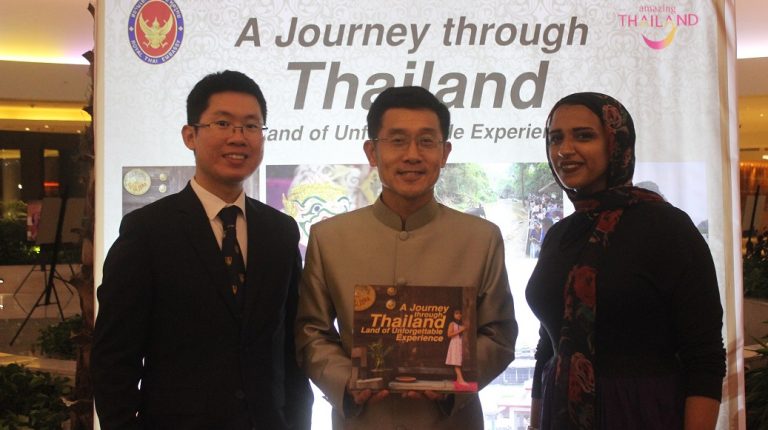 Millions of Egyptians among people from all over the world visited Thailand throughout the past years. They recounted stories of the country’s mesmerising sceneries, charm, and serenity, memories they will return to Egypt with. However, was Asmaa Gamal’s main focus was roaming the whole country to discover all its hidden cultural gems which are rarely revealed to the world, which she featured in her latest photobook, A Journey through Thailand: Land of Unforgettable Experience.

A Journey through Thailand: Land of Unforgettable Experience photobook’s publishing was celebrated by the Royal Thai Embassy last week. Captured by the young Egyptian photographer, Asmaa Gamal, the book sheds light on every rich cultural ritual Thailand is known to have, apart from the well-known touristic destinations Thailand is famous for.

Gamal, with the help of the Royal embassy in Cairo, and the Tourism Authority of Thailand, roamed the country last March for 10 days, captured the Thai legacy represented in people’s daily lives, and activities.

“We wanted to present Thailand to Egyptians through one of them” Chainarong Keratiyutwong, Thai ambassador in Egypt told Daily News Egypt, “it could have been much easier to ask for a Thai photographer to capture photos presenting the national culture, however, there are some things that as  part of the community you become familiar with, so we wanted an Egyptian photographer to portray Thailand from the eyes of Egyptians.”

Keratiyutwong believed that the most essential factor of this photobook is that it shows Thailand in a different way, which relies on photos more than text.

“People nowadays do not read much, so writing thousands of words about the beauty of the country will not capture attention as much as a rich, well balanced photo, captured by a talented photopher like Gamal,” he explained.

Gamal, who also works as a photographer for DNE, said in her speech that she aimed to tell a story with every photo she took, which can be said without any words.

“It is always said ‘use pictures, they’re worth a thousand words.’ As a photo journalist, I wanted to write stories with my photos, and to capture the moments they portray,” she said.

The celebration took place at the Hilton Cairo in Heliopolis, where an exhibition of some of the book’s photos were exhibited.

The launch witnessed the attendance of about 80 guests, consisting of diplomatic corps members, representatives from the Egyptian government, as well as tour operators.

“We wanted to organise the exhibition in an open place, where random people walking by could simply see the beauty of the country through pictures, without having to go to a certain art platform in order to do so,” Keratiyutwong explained.

The book displays some of Thailand’s areas, which are not as famous as most of the touristic destinations. Throughout her journey, Gamal roamed Thailand from north to south, covering the lives of Thai people who are far from being tourism destination visits.

“We took her to the mountain residents at the north, Buddhist temples, and massage schools, and of course we did not completely miss the more famous spots like the floating market,” the ambassador further added.

The embassy plans to further distribute the photobook to libraries, and other entities in Egypt, so as to ensure that this bilingual book, English and Arabic, which serves as an invaluable source of information about Thailand, can reach a wider Egyptian audience.