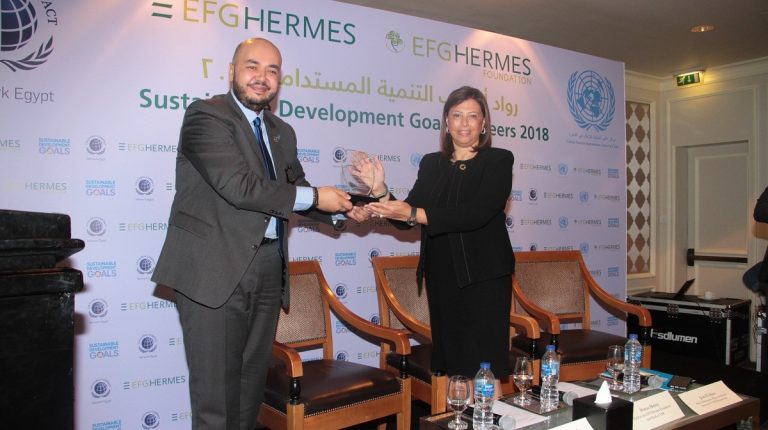 The chief executive officer (CEO) of the EFG Hermes Foundation, and Head of corporate social responsibility (CSR), Hanaa Helmy, was recognized by the UN Global Compact— the world’s largest CSR initiative— as one of 10 Sustainable Development Goals (SDGs) pioneers in 2018, for her work in investing in social development, and advancing sustainability in Egypt.

Since 2006, and as the founding CEO of the EFG Hermes Foundation, Helmy has championed several social development initiatives throughout the country.

Helmy has been instrumental in cultivating the organization’s holistic approach to sustainable development, educating and onboarding internal stakeholders, overseeing the growth of the foundation’s projects, and partnerships. Through the efforts of Helmy and the foundation, EFG Hermes joined the UN Global Compact in 2011, aligned its social investment efforts with the SDGs and, as of 2017, developed tailored ESG (environmental, social and governance) strategies for relevant business lines.

“I am incredibly honoured to be recognized by the UN Global Compact and have the opportunity to attend the 2018 Leaders’ Summit,” Helmy said.

“In truth, this is a recognition of the achievements of the EFG Hermes Foundation, and the CSR Department as a whole. The visionary thinking and tireless efforts of our team of employees and volunteers, have allowed us to execute our holistic vision for sustainable development,” she said, adding that “we are also fortunate to have the full buy-in of EFG Hermes’ leadership, who not only support the Foundation’s work, but have also taken on the task of integrating sustainability targets into the company’s core business.”

The EFG Hermes Foundation manages a variety of initiatives thoroughly covering Egypt, which focus on the three core pillars of poverty alleviation, disease prevention, and youth empowerment. Its projects have focused on creating jobs, building infrastructure to improve quality of life, prevention of the spread of disease, as well as offering educational opportunities for children and adults in impoverished areas of the country.

“The EFG Hermes Foundation has led by example the promotion of social development, and positive change, across Egypt over the past 12 years under Helmy’s guidance,” said Karim Awad, group CEO of EFG Hermes.

“Through the Foundation, EFG Hermes has consistently been able to fulfil our core pillar of public responsibility,” he asserted.

Tata Nano: End of the road for ‘world’s cheapest car’