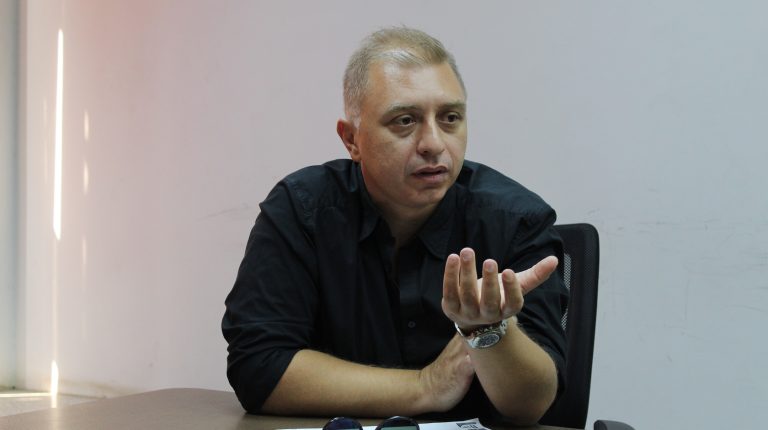 The Marketing Manager of the Egyptian Football Association (EFA), Mohamed Samir Zaher, spoke to Daily News Egypt regarding several issues related to Egyptian football, especially the ongoing dispute between Liverpool’s winger Mohamed Salah and the EFA over the unauthorised use of the player’s image for advertising, as well as marketing and investment contracts of the EFA., the transcript for which is below, lightly edited for clarity:

Can you tell us about the latest developments of Mohamed Salah’s dispute with the EFA?

The crisis erupted basically late March between Rami Abbas, Salah’s agent and lawyer, and the EFA, after the player’s photo appeared on the EFA’s private plane accompanied with an advertisement for the telecommunications company “WE” which competes the player “Vodafone” sponsor company. Salah’s sponsors, signed a contract worth over £90m, could seek compensations from him for that incident. The problem lies in neglecting Salah’s sponsorship rights and not obtaining his permission to participate in certain advertising campaigns. After I assumed the responsibility of the EFA’s marketing affairs, I contacted Salah and told him that I will keep in touch with his agent, to solve all the commercial rights disputes following the World Cup, but he sometimes prefers to contact Hani Abu Reda, head of the EFA, in this regard.

How will you solve this dispute?

There is a clause in the EFA’s contract with the advertising and sports marketing agency Presentation Sports, which has the association’s sponsorship rights,  giving it the individual and collective commercial rights of the national football team. However, FIFA, the world football governing body, recently announced that only the player has the right to sign or contract his own economic rights. Therefore, I suggested holding a meeting between all involved parties to reach a solution that suits everyone.

What are the most important files on which the marketing department is working on currently?

Are there any problems regarding the EFA’s contract with Adidas?

There were problems concerning displaying Adidas’ ads in some matches, and on the official social networks of the EFA. The national team also overconsumed large quantities of sportswear in the last period, but we managed to solve this issue. I knew that the EFA met with the company in April, when they complained that their sales of the national team’s kit did not exceed 8,000 pieces.

How do you see this sales rate?

I believe it was very low. Egypt’s qualification for the World Cup should have pushed sales to at least 30,000 kits. I contacted the company’s officials and told them that the kit was sold in Egypt at EGP 1,850 which was very expensive in the local market. However, over 30,000 Egyptians went to Russia during the World Cup and at least 60% of them bought the kit, but unfortunately the Adidas’ stores had a shortage of the national team’s sportswear, which forced the fans to buy unoriginal kits.

Did you receive any other kit sponsorship offers?

The EFA and Presentation are negotiating with three companies: New Balance Athletics, Italian Kappa, and Spanish Joma. The Boston-based New Balance, sportswear sponsor of Liverpool and Porto, expressed their interest through their agent in Egypt, and the parent company’s officials came to Cairo, where they met with Karim Kordy, the EFA’s board member. We told them our terms of contracting, which are actually the same with Adidas. We asked for a gradual payment from €150,000 to €250,000 annually, sportswear supplies to all national football teams with an annual value of €1.15m, and special rewards in case of achieving positive results in the CAF Africa Cup of Nations and qualification for the 2022 World Cup.

Did they have any concerns?

They were concerned in the beginning about the EFA’s relationship with Salah, as the meeting was held during the peak of the sponsorship, knowing that Salah has nothing to do with the negotiations. They also wanted to know the number of our future matches and the teams to be sponsored, as well as the required annual sportswear supply.

How much does the EFA target from its future sportswear sponsorship contract?

We aim to receive €6m from our future sportswear sponsorship, which will be determined in a public tender to be held in November. Unfortunately, the national team’s world ranking declined recently, which affects its marketing value.

Have you suggested any development ideas to the EFA’s management board?

We suggested to contract with an e-marketing company to manage the EFA’s pages on different social networking platforms, and we have already received several offers. Presentation wanted to play this role, but we refused. We are also negotiating with the sponsor to open commercial stores to sell the national team’s sportswear, as is the case all over the world, a step should have been conducted a long time ago. We are awaiting the EFA’s board to approve the move, so that we can prepare a feasibility study for the project. We aim to open a sportswear store at the EFA’s new headquarters in the Sixth of October City, after getting the required approvals from the neighbourhood and the governorate. We will have a clear vision of the project two months from now. We also contacted different Egyptian football teams to participate in the new Egyptian Premier Futsal League, scheduled to launch in the next 2019/20 season. The existing clubs in the Egyptian Premier League can participate automatically in the new league. The EFA will be responsible for marketing the new tournament’s commercial and broadcasting rights, because it was not included in the EFA’s contract with Presentation.

How do you see the criticism of the lack of unified ball for the Premier League?

We are working with the sponsoring company to market the Premier League’s official ball. It is unacceptable to play the country’s main football tournament with different balls.

Are there any plans to collaborate with other football federations across the world to benefit from their expertise?

About a month ago, a representative from the Spanish National Professional Football League (LFP) visited Cairo as a part of their plan to develop football all over the world. He offered to cooperate with the EFA on the development of local football for women, and training coaches. There may be a possible cooperation soon.

What are the latest developments of the application of video assistant referee (VAR) system in the Egyptian Premier League?

The EFA’s sponsoring company has decided to bear the costs of applying the VAR technology, and will finance the purchase of required equipment. We are currently putting a plan to implement this move.

When will Egypt have its professional football clubs’ association?

This is unlikely to happen, perhaps only after the end of the EFA’s contract with Presentation in 2022, because the main role of the professional football clubs’ association is to market the premier league’s broadcasting rights in the whole world.

What is your plan for the next sponsorship contract?

I hope the EFA’s coming sponsorship contract, which will start after the 2022 World Cup, will reach EGP 1bn. The current contract is worth EGP 405.5m, and it was good then.

Do you think this is possible?

This will only happen if fans returned to the stadiums in full and adequate capacity, and applied professional standards in the local clubs. I believe we can do that within the next three years.

How can the fans return to stadiums?

We have to take quicker procedures in this regard. The absence of fans has a negative economic impact on Egyptian football. I called for the Minister of Youth and Sports to adopt the idea of the “Fan cards” system which enables fans to attend any game for their club. This system allows the state to investigate the criminal record of fans, so that we can avoid riots in stadiums. We have organised two workshops about the return of fans, and we developed a plan, but it has not been ratified for security concerns.

How do you see the Pyramids FC experience?

It is a very good experience. We hope it can be repeated in other clubs. I just wish to put some controls in place so that we can maintain the Premier League’s stability, and secure these investments. We have to admit that this experience has increased the marketing value of the tournament.