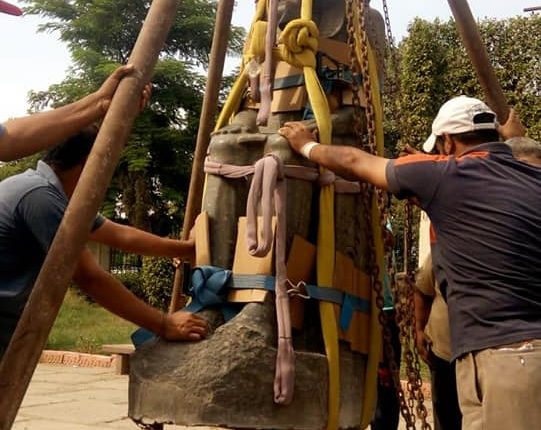 Two granite statues for Ramses II and Horus God were transferred on Saturday from Al-Masalah Garden in Zamalek to the Grand Egyptian Museum (GEM) to be renovated and after the completion of the restoration process they will be prepared for display at the soft opening of the GEM.

The statues are planned to be among the displayed monuments at the GEM museum’s soft opening, which is to take place early 2019.

Both statues were transferred from where they have been discovered in Al-Matariya archaeological site in Cairo to the garden in Zamalek in 1962.

The GEM’s general supervisor, Tarek Tawfik, stated in a press release that the statues are to immediately undergo renovation.

The Ramses II statue is one of the rarest statues of the king. The black granite relic displays the king sitting on a chair carved with Egyptian hieroglyphs. The three-ton statue’s height is over 2 metres.

As for the statue of Horus, it is made of pink granite, and its height is 120 cm.

The one-ton statue features the ancient Egyptian god as an eagle.

The process of preparing the statues to be transferred took two days, in order to wrap Ramses II statue with foam, and put the other one inside a wooden box to facilitate their transfer from one place to another.

Transferring the statues comes as a part of a long chain of renovating moments to prepare them for the soft opening.

Earlier this year, a giant Ramses II colossus was also transferred for restoration at the GEM. The preparations of transferring the giant statue lasted for three months.

The statue was originally transferred 11 years ago from its location in one of Cairo’s most crowded streets, Ramses, where it overlooked Cairo’s main train station connecting the capital with other governorates, to the storages of the GEM, where it was kept until building the museum is completed.

The biggest museum in the world is expected to have its full opening in 2022. The soft opening is planned to include the museum’s atrium, Grand Staircase, and its Tutankhamun hall, as well as the Golden King’s Gallery, which will put on display, for the very first time, as well as Tutankhamun’s entire treasure collection which includes 5,200 artefacts.

Do not wait for achievements, focus on content: Refky