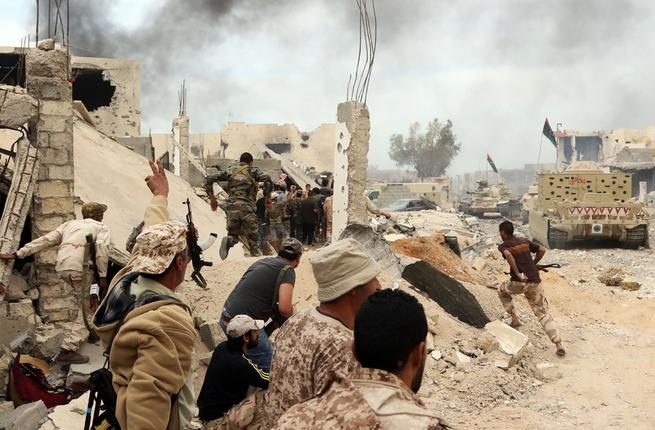 Last Monday, Libya’s forces captured Egypt’s most wanted terrorism suspect, Hesham Al-Ashmawi, in Derna city. His arrest came as a significant moment for Egypt in its war against terrorism.

Al-Ashmawi, a former military officer, has been sentenced to death in absentia, after a military court convicted him of planning several attacks against security personnel, officials, and Coptic civilians. Dissenting from the Sinai-based Ansar Bayt Al-Maqdis after the group swore allegiance to the Islamic State group (IS), Ashmawi formed his own Al-Murabiteen cell.

Ahmed Al-Mismari, spokesperson for the Libyan National Army (LNA), explained in a statement that Ashmawi was “taken by surprise” by speed of the security operation, preventing him from blowing a suicide belt he was wearing.

Under the command of Field Marshal Khalifa Haftar, the LNA has been for months now leading its own war against extremist armed groups in eastern Libya. Earlier this month, clashes renewed in Derna city between the LNA and an Islamist militia coalition known as the Derna Protection Force – formerly the Derna Mujahideen Shura Council.

This came as Haftar’s forces announced last May a military operation to “liberate Derna” from Derna’s Protection Force, which pushed IS out three years ago, and then they declared victory in July, despite recurrent fighting, and continued displacement ever since.

According to humanitarian groups, there has been more than 49,000 displaced persons and returnees to and from Derna since the beginning of the year, the Libya Observer reported. In a June 2018 report, Amnesty International called on Haftar “and all parties involved in the fighting to urgently open humanitarian corridors to give impartial assistance, and save the lives of civilians still trapped in the city as the army advances.”

Derna, a port-city in eastern Libya with a population of about 120,000, broke from the government following mass protests that overthrew long-time dictator Muammar Gaddafi in 2011, and came under the control of the National Transitional Council.

In 2014, the city fell under the control of IS, seeking to make of it another stronghold outside Syria and Iraq, along with Sirte.

In February 2015, Egyptian air forces, in coordination with Libyan forces, launched airstrikes against IS targets, after the group conducted a brutal execution of 21 Egyptian Coptic men kidnapped in Sirte. Two years later, Egyptian fighter jets carried out airstrikes again near Derna, after an IS affiliated group claimed an attack against a bus carrying Coptic Christians in Egypt, which killed at least 29.

In an op-ed for Al-Ahram on Saturday, political researcher Amr Abdel Samie argued that the LNA was what was holding Libya together currently. No outsiders could have been able to go get Al-Ashmawi, he cited as an example as he opinionated that if elections were to take place, the people will choose the candidate who belongs to the army.

Commenting on the arrest of Ashmawi, an LNA official told the media that he was on his way to escaping Derna, given the tight siege imposed on militant groups in the city. Two days after his capture, the LNA reportedly arrested Al-Ashmawi’s bodyguard, Safwat Zidan.

In April, Haftar returned to Benghazi after receiving medical treatment in France, as uncertainty regarding his condition sparked rumours of his death. On 7 May, the LNA commander declared the zero hour for an operation aimed at liberating Derna, and targeting “terrorist hideouts”, he said in a speech, where he also assured “instructions to avoid civilians.”

8 May: LNA advances in eastern parts of the city, captures high ground outside the city. Reports on fleeing families emerge. High Council of State members denounce and demand end of operation

18 May: LNA acquires a new frigate to be added to naval fleet, says it consolidated power in Derna

24 May: Two LNA soldiers are killed in a car bomb and a third abducted from a checkpoint, as Haftar says he is close to victory

29 May: Sources in Derna report that Derna Protection Force withdrew from Al-Fatayeh district to the east of the city. LNA takes control of western entrance to Derna

9 June: Photos on social media show civilian cars on the road waving white flags so as not to be shot as they flee some Derna districts because of the fighting, the Libya Observer reports

21 June: “The main battle is finished, and we are fighting) in an area of one square kilometre,” LNA spokesperson Al-Mismari tells media

As UN reports shed light on humanitarian crisis in Derna, the fighting against remnants of fundamentalists continues. In August, The LNA reported that it has killed 15 ‘‘terrorists’’ on the Ajdabiya-Tobruk desert road, whom it claims were escaping from the city of Derna, the Libyan Herald reported.

Back in 2014, Haftar launched the ‘Dignity Operation’ against Islamist militants in Benghazi, but it took more than two years to dislodge Islamists.

In September 2016, before the Tobruk-based parliament promoted him to field marshal, Haftar launched operation ‘Swift Thunder’ and seized key oil terminals of Zueitina, Brega, Ras Lanuf, and Sidra, in the oil-rich heartland locally known as the ‘oil crescent’.

Clashes with militias sparked violence last month in the capital Tripoli. By the last week of September, the death toll stood at least at 115, and more than 300 people injured.

The possibility of holding the Libyan elections under current circumstances has been ruled out. In May, Haftar and Fayez Al-Sarraj, his rival leader from the internationally-recognised government in Tripoli, agreed in a Paris meeting to hold the UN-backed elections in December.

In September, UN envoy to Libya Ghassan Salame told the press that was hardly an option anymore.

In other news, a report published by ‘The Sun’ last week sparked controversy after it suggested that Russia has deployed troops to Libya to back up Haftar, which Moscow denied.

Russia is expected to participate in an upcoming November conference on Libya hosted by Italy.