During a discussion with military personnel last Thursday, Egyptian President Abdel Fattah Al-Sisi said the state wants to retrieve officer-turned-militant Hisham Al-Ashmawi, in order to hold him accountable for the crimes he committed.

Al-Ashmawi, a former Egyptian Special Forces officer, has turned into a jihadist and joined militant circles in Syria, Iraq, Sinai, and finally Libya, where he was arrested last Saturday by the Libyan National Army (LNA).

During his speech before hundreds of military personnel from all branches, Al-Sisi made a comparison between Al-Ashmawi and another officer named Ahmed Al-Mansy, a Special Forces commander who was killed in an ambush against military headquarters in North Sinai in October 2016.

“The difference between Al-Ashmawi and Al-Mansi, is that one was confused and might have committed treason, but the other offered his life for the protection of the state,” the president said.

The 1936 Anglo-Egyptian Treaty signed at Montreux, Switzerland—which officially brought to an end 54 years of British occupation of Egypt—gave the Egyptian government the administrative control over the national armed forces. As a result, Egyptians were allowed to enrol in the country’s different military academies.

However, since the signing of the treaty, and the growing influence of political Islam in Egypt, several officers and cadets were also, as per Al-Sisi’s description, confused and deviated from the politically conservative, and nationalist stance of the Egyptian state.

The first group of officers who were influenced by outside ideologies was the Free Officers Movement who later led a coup in 1952, overthrew the Egyptian monarchy, and confronted the British occupation. They were influenced by several and diverse ideas ranging from communism, socialism, Islamism, and even fascism.

However, as the Free Officers overwhelmed the scene in Egypt’s political and social sphere, as they formulated the very political ideology that has dominated Egypt since 1954, constituting of state capitalism, patriotic nationalism, and moderate application of Islam, with a touch of neo-liberalism. 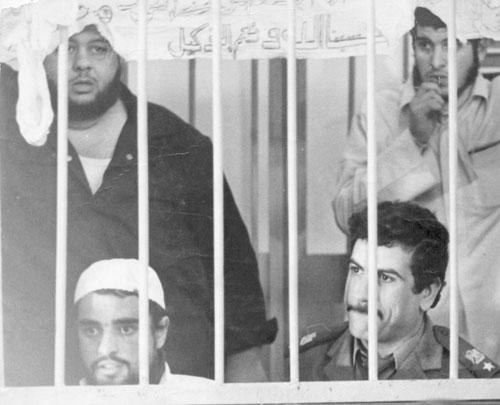 Following their first clash with the Egyptian state, and the military-motivated government of Nasser, the Muslim Brotherhood’s revolution from strategy of mobilising the masses did not include recruiting members only from syndicates, low-income groups, and rural areas, but also security and military personnel. According to the Egyptian state narrative, several students in the Military Academy were arrested in 1956, after findings by the Military Intelligence Apparatus claimed that there was a nationwide plot by the Brotherhood to assassinate the president and top officials, and stage a sabotage countrywide. According to websites affiliated with the Brotherhood, one of the Military Academy students, named Fathy Abdel Haq, was arrested in this incident, and was sent to prison.

The 1965 Plot, as described by many historians, led to the arrest and detention of hundreds of Brotherhood members across the country. However, after the death of Nasser and the appointment of Anwar Al-Sadat as the new president, several imprisoned Islamists were set free by the regime which aimed then to counter the spread of Marxist and Leftist trends in universities, and society.

The facilitations offered by the state for Islamists in Egypt since 1971 helped to shape a more radical trend among the Islamists, who thought the Brotherhood was more reformist, rather than revolutionary.

In April 1974, a group of radical Islamists, most of whom were officer cadets, attacked the Military Academy and managed to reach a warehouse inside, but were met with heavy resistance from the academy guards who killed 11 of the militants.

The 1974 assault was the first organised militant act against the 1952 regime, and hence changed the dynamics of the Jihadist groups in the Middle East. Two of the defendants in the case, Saleh Saria and Talal Al-Anadouly, were executed, while the rest of the defendants received harsh prison sentences.

Since 1974, many assaults and assassination operations have took place by different militant groups in Egypt. In 1981, the conflict between President Sadat and his former Islamist allies reached its peak. On 6 October of the same year, while Sadat was showcasing military troops in a parade, commemorating the 6th of October War victory, a group of military officers and soldiers descended from a military van and assassinated Sadat in a dramatic scene. One of the perpetrators was Lieutenant Khalid Al-Islamboli who was arrested and convicted of assassination in a military trial and later executed.

Amid Egypt’s ongoing counter against radical political Islam and militancy, several attempts by Egypt’s security apparatus has been made to expel students who have alleged ties to the Islamists or the Muslim Brotherhood. In 2014 and 2015, the Police Academy Council expelled around 80 students after accusing them of allegiance to the Muslim Brotherhood.

Similarly, in 2013 the ministry of interior suspended dozens of bearded officers who demanded to continue their work in the police apparatus despite a police ban on facial hair for officers. At the time, the ministry argued that the suspended officers are in violations to security regulations and grooming standards. In July 2018, the spokesperson of the pressure group, Colonel Hani Al-Shakary, was arrested and referred to court on charges of joining the militant group Lewaa El-Thawra.

Al-Shakary was accused of joining a terrorist group and training militants in the governorate of Menoufia. He and others were also accused of executing an attack on a police checkpoint in 2017, killing two policemen.