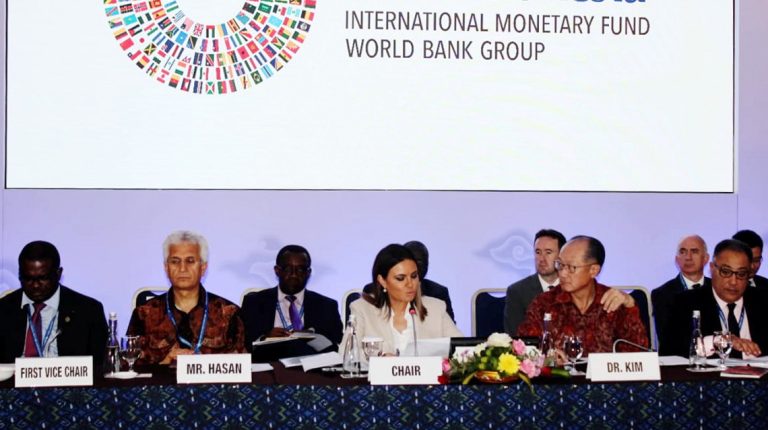 The World Bank (WB) Group will invest $45bn in Africa over the next three years to develop education programmes, basic health services, clean water, sanitation, agriculture, and the business climate and infrastructure, said Jim Kim, President of the WB, according to a statement issued on Sunday, by the Ministry of Investment and International Cooperation (MIIC).

The statement explained that Kim and Sahar Nasr, Egypt’s minister of investment and international cooperation, headed a meeting for the African Caucus, on the sidelines of the WB and the International Monetary Fund (IMF) annual meetings in Bali, Indonesia.

The African Group’s support to the WB has contributed to increasing its support for growth in the African continent, noted Kim, adding, “I thank Egypt for its efforts during the presidency of the African Union. Nasr is doing great innovative work in Egypt.”

Kim explained that the possibilities for the African continent to transition from agriculture to manufacturing industries, including the automotive industry and shipbuilding, are increasing year after year, due to the surge in technology, adding that many African presidents informed him that they need to build railways linking the continent and roads not affected by climate change.

“We will stand by you all the time,” Kim concluded his speech, noting that the WB will support African youth.

Moreover, Egypt, as the head of 2018 African Caucus, presented a memorandum to the WB and the IMF, with demands of the African Group for the bank and the fund to help African countries achieve their development goals, including the promotion of infrastructure investments, and the use of innovative knowledge and solutions to the development challenges facing African continent, said the statement.

For her part, Nasr congratulated Ghana on her assumption of the chairmanship of the African Caucus for 2019, inviting the African governors at the WB to participate in the 2018 Africa Forum, which will be held under the auspices of president Abdel fattah Al-Sisi, and organised by the MIIC in cooperation with the COMESA Regional Investment Agency, in Sharm El-Sheikh from 8 to 9 December 2018.

The Forum will set priorities for development in the African continent, which is held before one month of Egypt’s presidency of the African Union (AU) in 2019, said the statement, adding that Al-Sisi will put an integrated vision for development and economic integration with all African countries during the forum.

The Sharm el-Sheikh Declaration aims to encourage direct domestic and foreign investment, provide good tax incentives to investors, said Nasr, noting that the WB has a priority to finance projects with a developmental and social impact which contributes to the achievement of sustainable development goals.

The digital transformation is an effective tool for enhancing access to finance for women’s projects and small and medium-sized enterprises, noted Nasr, adding that some African countries have leading success stories in mobile banking, which has led to a significant impact on poverty reduction.

The Sharm El-Sheikh Declaration called for increasing the representation of African staff at the WB and the IMF, indicated Nasr.

Additionally, Hafez Ghanem, the WB’s Vice President for Africa, said that increasing infrastructure support in Africa needs to boost the bank’s funding to the private sector, adding, “the twenty-first century will be the century of the African continent, where we will contribute to the growth of the continent and reduce poverty.”

Moreover, Philippe Le Houérou, president of the International Finance Corporation, said that his organisation will increase its support to the private sector in Africa, including renewable energy, industrialisation, and digital technology.