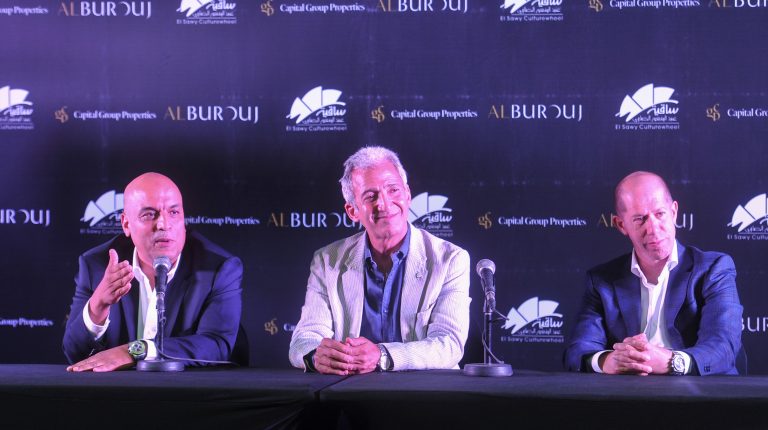 Chief Projects Officer at CGP, Amgad Hassanein, said that the wheel is the first service project to be opened in Alburouj to serve customers both inside, and outside the project.

Hassanein added that activities and services will be exclusively supplied to the wheel in the Alburouj  project, commensurate with all the possibilities provided by the Capital Group for the market.

the focus will be on the provision of various activities appropriate with and to the possibilities and project’s space availability, as the theatre can accommodate about 10,000 people, he indicated.

“The total investment that the company has injected into the Egyptian real estate market is $300m since the company was launched in 2015,” Hassanein elaborated. “These investments represent the value of the land and construction works that are being carried out in the project, besides other fees and expenses. The company seeks to acquire the first place in the Egyptian real estate market.”

The decision of the parent company to be present in the Egyptian market was based on the strength of the market and its investment attractiveness, highlighted the chief projects officer.

Hassanein explained further that the delivery of the project’s first phase will begin in the middle of next year, which includes 300 units with various spaces.

The company is also currently seeking to launch a number of services in the project which provide the basic customer needs.

The International School of Choueifat will be established in the near future to serve the project’s clients.

The Alburouj project is an integrated residential project located on an area of 1,200 feddan, (5m sqm), and provides 50,000 direct, and indirect jobs.

The company has succeeded in achieving its targeted sales for the current year before its end, which reflects the substantial demand in the local market, and the quality of the company’s product. Additionally, the company has begun marketing the second phase of the project, and initiating its construction work by the end of the year, he noted.

Hassanein revealed that the total investment volume in the first phase of the Alburouj project reached EGP 3bn, including the implementation of about 2,000 units in the project, and its infrastructure.

The company has signed a contract with the Arabian Construction Company for the implementation of villas inside the project with a value of EGP 1bn.

The Chief Projects Officer pointed out that a new sports club will be established within the project next month, as part of the company’s plan to implement an integrated urban project.

Additionally, he unveiled that laying the foundation stone of the Sheikh Zayed Grand Mosque project will take place next month with investments of approximately EGP 500m.

Capital Group Properties is preparing to set up an integrated smart village within the project, with investments worth EGP 2bn, within the project’s strategic services’ plan. The company has also signed with the Africa Crest Education Holding, to develop the CADMUS international school as its first school in Egypt, managed by the SABIS International School.

Capital Group is implementing a central park in the project, which is scheduled to operate its first phase in the coming period.

Furthermore, he added that the company plans to expand outside Greater Cairo to implement real estate projects in new cities such as the North Coast, especially with the success of the company in the implementation of its investment plan in the Alburouj project, the company’s first project in the local real estate market.

Moreover, the company is implementing its marketing plan according to its target for the current year, and recently participated in Cityscape Global Dubai 2018, as part of its plan to expand in exporting real estate [selling property for foreigners or Egyptian expatriates in $US], he explained.

Hassanein stressed the importance of the participation of companies in real estate exhibitions, both at home and abroad, to familiarise customers with the current projects being implemented, and also to maintain a presence for Egyptian companies in the region’s markets, in addition to identifying the needs of customers overseas.

“Egyptian companies have all the necessary means to attract foreign buyers to the Egyptian real estate market, especially in light of the megaprojects that have been launched and implemented in recent years. Exporting property to Egyptian expatriates or even to customers from the Gulf countries is the solution in the coming period to remedy the recession crisis in the luxury real estate market,” he said.

However, there is still a strong demand for the real estate market, and the company aims to increase the sales percent to Egyptian expatriates, and participate in foreign exhibitions. Furthermore, about 3% of the company’s clients are foreign and Gulf nationals, where the company is seeking to increase its activities during the coming period.

He pointed out that the local real estate market will witness a number of significant changes during the coming period, most notably the entry of new players and the exit of others, in the context of the continued disposal of the market from companies that are not serious, and do not have enough experience to deal with market changes.

He called for a clear governmental investment plan which the investor will be able to study available investment opportunities in a peaceful manner, instead of offering and receiving offers and deciding on them within a short period of time. Some developers may not be able to study the opportunity, and decide to participate in it in that short period, Hassanein concluded.