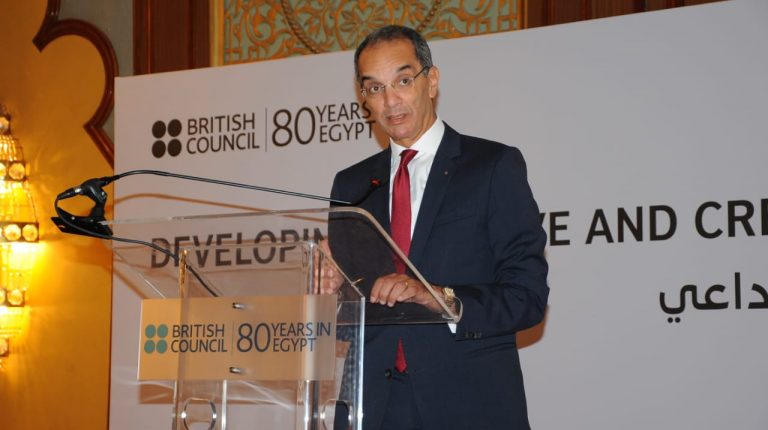 The Minister of Communications and Information Technology, Amr Talaat, said that digital technology has greatly contributed to developing the economy based on creative industries, which is witnessing growth across the globe. This makes investing in the fields of technological innovation and entrepreneurship a necessity in order to achieve sustainable development. Talaat noted that creative economy and reaching an inclusive society is one of the Egyptian government’s priorities to implement in its 2030 vision.

This came during his speech at the ceremony organised by the British Council to launch the programme of ‘Developing Comprehensive and Creative Economies’, within the framework of reinforcing the partnership between Egypt and Britain, and supporting the creative economy in Egypt. This took place in the presence of Alistair Burt, the British Minister of State for the Middle East and North Africa, in addition to Sir Geoffrey Adams, Britain’s Ambassador in Egypt, as well as Elizabeth White, the director of the British Council in Egypt, as well as several representatives from government bodies, local agencies and organisations.

In his speech, Talaat noted that the ministry is contributing towards achieving Egypt’s 2030 vision through several projects which include encouraging young people to innovate and create, as well as develop their skills and spread the entrepreneurship culture with the protection of intellectual property, in addition to implementing several programmes to adapt technology in order to merge and empower several segments of the society, including distance treatment, technological development of societal schools, building young people’s abilities in rural and underprivileged areas, and providing technological accessibility for persons with disabilities.

The Ministry of Communications and Information Technology (MCIT) is working to increase the ability of persons with disabilities to enter the labour market through highly accessible training programmes in the field of communications and information technology, aiming to provide decent and diverse employment opportunities which guarantee their freedom of choice and independence in performance through an integrated work environment. It also supports youth innovation in the development of assisting technologies, to enable disabled people to become integrated and active members of their community.

Noteworthy, creative economy provides promising opportunities to entrepreneurs in various fields, especially young people, women and marginalised groups in society. Within that framework, the ministry is carrying out a study of the cooperation aspects with the British government and the British council through this programme to use the tools of communications and information technology to contribute towards reaching an integrated creative economy.

Topics: Amr Talaat the Minister of Communications and Information Technology