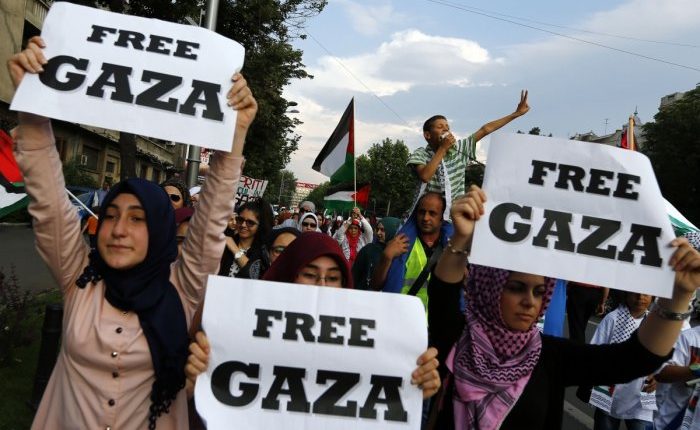 Israel warned the Palestinians living in the Gaza Strip of a “fearsome blow” if order is not restored in the border. During a meeting of the Israeli security cabinet on Sunday, Israeli Prime Minister Benjamin Netanyahu said that If Hamas does not stop “violent attacks against Israel,” then Israel will stop them through “forceful actions.”

“Hamas has apparently not internalised the message: if they don’t stop the violent attacks against us, they will be stopped in a different way, and it will be painful, very painful,” Netanyahu was quoted by the Jerusalem Post, adding that if Hamas were smart, “they would stop the fire and the violent riots now.”

Thousands of Palestinians engaged in the demonstrations in Gaza strip dubbed the ‘Great Return March’ since 30 March to commemorate the 42nd  anniversary of ‘Land Day’, and demanding the return of refugees to their homes where they were evacuated at the time of establishing Israel in 1948.

However, following Netanyahu’s Sunday meeting, his office denied that there are any instructions from the Security Cabinet to the Israeli army to deliver “a harsh and painful blow on terrorist elements in the Gaza Strip.”

At the time of the meeting, the Israeli forces attacked a group of Palestinians who were demonstrating along the borders between the Gaza Strip and Israel.

Moreover, the Israeli Defence Minister Avigdor Liberman, accused Hamas of holding Gaza residents as hostages on behalf of Iran. “I call on you, residents of Gaza: act against the extremist leadership that has taken you hostage in the service of the Iranian ayatollahs,” Liberman said.

In an Arabic post on Facebook, the Israeli minister told the Gazans, “the State of Israel was prepared to improve the civilian reality in the Gaza Strip, but the decision of the Hamas leadership to use serious violence – especially on the same day in which tankers of diesel fuel were brought into the Gaza Strip – is what brought about the decision to cut off the supply of fuels.”

He put all of the responsibility for the deterioration in the humanitarian situation in the Gaza Strip on Hamas’ shoulders “and Hamas alone.”