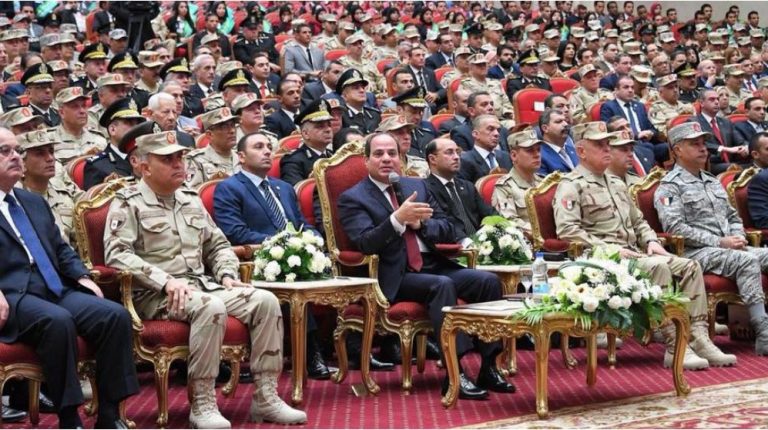 In state-owned daily Al-Ahram, Salah Montasser wrote that the “Mercedes and Seat” metaphor the president used in a recent speech to describe the Egyptian and Israeli conflict during the 6 October War was the most accurate metaphor. Montasser outlined the major challenges which faced Egypt – the Seat – able to beat Israel – the Mercedes – including beating their advanced military equipment, and fooling them into believing Egypt was not able to go to war.

In state-owned newspaper Al-Akhbar, Elham Abu El-Fateh seconded Al-Sisi’s rejection of the Muslim Brotherhood, writing that Egyptians won’t forget, and will not let them back in the scene, after they learnt the lesson the hard way, and found out under their rule what treason meant.

Likewise, Al-Akhbar’s Karam Gabr argued in his piece titled “We tried them” that since the 70s, the Brotherhood spread into universities, and enjoyed good relations with the state which used them to oppress leftists and communists, advancing politically and socially until they started facing public rejection as their violence increased, in a scenario very similar to the post-25 January, in his view. “We have tried them over and over,” Gabr opinionated.

Expressing criticism of political activists, Al-Ahram’s Amr Abdul Samie wrote in support of the ongoing investigations in the case publicly known as the foreign funding NGOs case, praising the recent summoning of activist Israa Abdel Fattah, and the travel ban of former presidential lawyer Khaled Ali. Abdul Samie said others too must be brought to “accountability” for leasing the “destruction of the state in 2011,” in reference to the January revolution.

Taking a more aggressive tone in the privately-owned Al-Yom Al-Sabea, Alaa Abdel Hady called opponents to government policies on social media “street dogs”, a negative phenomenon Egyptians have been accustomed to, in his opinion. In the past, street dogs would get a single shot in the head or poisoned, but animal rights groups considered such acts inhumane, the writer went on to say.