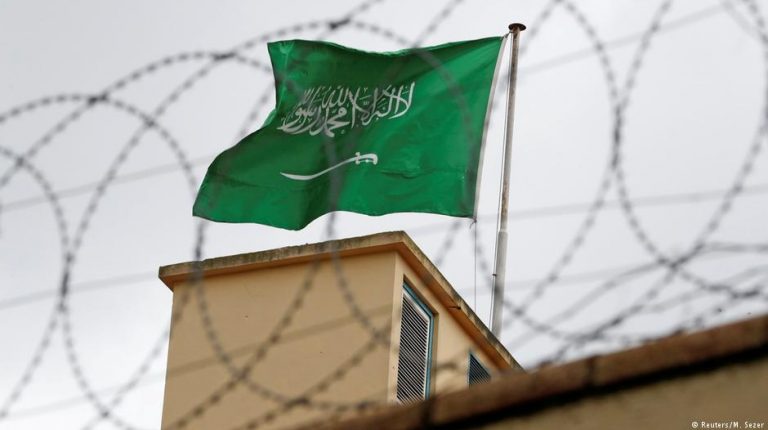 Statements from Saudi Arabia to respond to any Western sanctions imposed over the Khashoggi case with even greater actions are a veiled threat of monstrous proportions and demand a stern reaction, says DW’s Kevin Cote.Sunday's statement from the Saudi Foreign Ministry cited the kingdom's "influential and vital role in the global economy." That role is scheduled to be underscored at a conference called the Future Investment Initiative (FII) starting on October 23 in Riyadh. The conference should be boycotted by business leaders until the Khashoggi affairhas been cleared up.

The global business elite cannot be seen as supporting an authoritative, undemocratic regime, with a long record of human rights violations as it is strong-arming the enormous wealth of its Public Investment Fund (PIF) to buy its way into the post-industrial economy. The PIF is the sponsor of the Future Investment Initiative, whose purpose is to help the Saudi monarchs vouchsafe their fortune as the world weans itself off oil.

Dara Khosrowshahi, the Iranian-American CEO of Uber, has already said he would not attend the conference. That is significant, because the Saudi's have a $3.5 billion (€3.02 billion) investment in Uber through the PIF, so Khosrowshahi presumably has a major incentive to show up in Riyadh.

But the PIF has other extensive investments in US tech companies, and the conference is an open bid to secure more. On his trip to California in April, Saudi Crown Prince Mohammad bin Salman had unprecedented access to the giants of Silicon Valley, meeting with Tim Cook at Apple, Sergey Brin at Google, Jeff Bezos at Amazon, Mark Zuckerberg at FB and Richard Branson Virgin Galactic.

Through the PIF sovereign fund, the Saudis already have strong shareholdings in an array of high-profile startups, including Wag, DoorDash, WeWork, Plenty, Cruise, and Katerra.

Saudi's plowing their huge profits from oil into high tech companies means they are seeking a similar control over the post-industrial economy that they had during the industrial economy, and a dominance that they now have no qualms about wielding when the West threatens sanctions in the wake of the Khashoggi affair. When the Future Investment Initiative debuted last year, the sponsor claimed the nearly 4,000 attendees represented companies worth a total of "$25 trillion, or 25 percent of the global economy."

Though a pile of money that big is tough to resist for investment-intensive tech firms, bankers and consultants, the conference in Riyadh should be allowed to wither in the sands of the Arabian desert.

US tech companies are already under fire for privacy issues at home and monopoly and regulatory issues here in Europe. These are important debates that need to be addressed fairly and rationally, because the outcomes will be fundamental to the way we do business and the kind of societies we have in the future.

To maintain the trust of their customers and of policymakers, tech companies can now not afford to be seen as part of the Saudi's plan to extend its "influential and vital role in the global economy" while it maintains the status quo in violating its citizens human rights and denying them democracy.