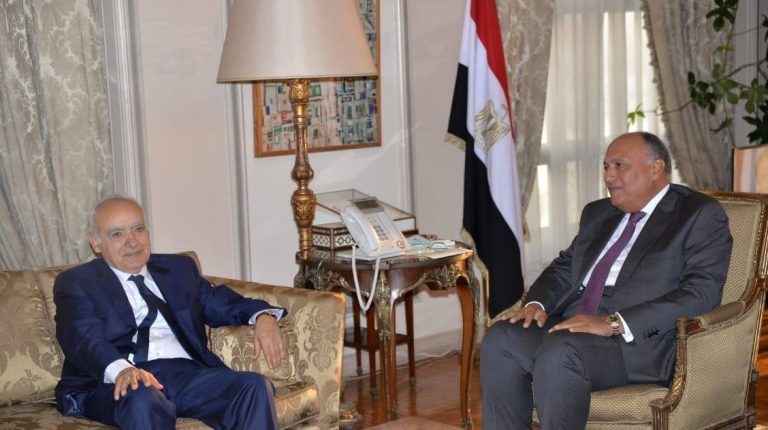 Both addressed possible ways to implement the political solution sponsored by the UN to settle the crisis in Libya, as well as tackling security, economic, and humanitarian challenges that resulted in it, according to the Egyptian Foreign Ministry’s statement.

Salame praised the Egyptian efforts in dealing with the Libyan crisis, and unifying the national security institutions of the war-torn country, the statement added.

Moreover, Shoukry hailed the UN efforts and reviewed his country’s efforts to settle the crisis, asserting that Cairo will continue its attempts to restore stability and security in Libya.

In September 2017, Salame proposed a work plan which includes holding presidential and parliamentary elections in Libya by the end of 2018.

However, the long-awaited elections might not be held this year, amid major challenges facing the large North African country, which is still split among various political and armed factions.

Since the fall of Muammar Gaddafi, Libya has remained in chaos, as the Islamic State group gained a foothold in Sirte, the birthplace of Gaddafi before it was recaptured in 2016.

There are three governments and two rival parliaments in the oil-rich country that has been suffering from a financial crisis since 2011 due to clashes between militias and forces loyal to these governments.

Late in 2015, the UN reached an agreement to form a new “unity” government headed by Prime Minister Fayez Sarraj, based in Tripoli, while the other two remain in the eastern cities of Bayda and Benghazi.