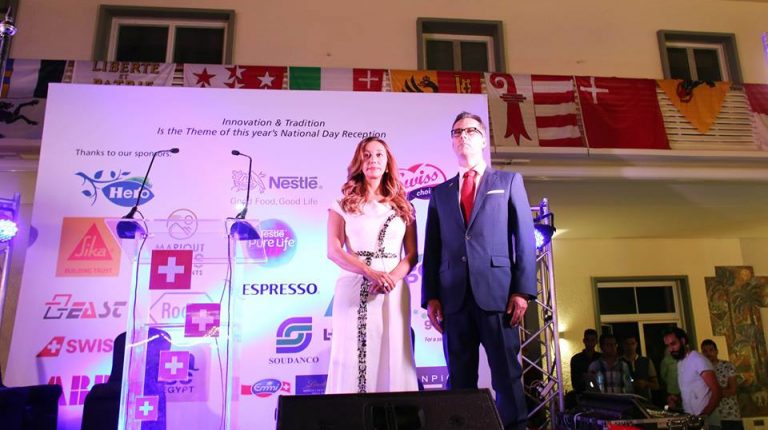 Switzerland will officially inaugurate a new Honorary Consulate for the Red Sea governorate on 21 October, with a Swiss Honorary Consul named Véronique Lusci, said Swiss ambassador to Egypt Paul Garnier, adding, “our new consulate will be based in El Gouna, and I am very grateful for our Egyptian partners and my very enthusiastic team at the embassy.”

Egypt and Switzerland have deepened their bilateral relations at various levels in 2018, mentioned Garnier during the Swiss National Day’s ceremony which was held on Wednesday evening at the ambassador’s residence.

Swissair is set to start flights from Geneva to Hurghada in October 2018, said the ambassador, adding that bilateral relations witnessed productive meetings between both countries’ presidents during the UNGA in New York.

Egypt’s President Abdel Fattah Al-Sisi, and President of the Swiss Confederation, Alain Berset, discussed the economic interactions between the two countries as well as migration issues in their latest meeting.

The ambassador referred to the Swiss President’s quote in the UNGA which was “all states are stronger if the international situation is more stable. The world is not a zero-sum game. lt is a positive-sum game, where cooperation creates only winners.”

The cooperative approach means that any subject can be debated at the factual level, and with the necessary openness, including human rights issues, elaborated the ambassador.

“Our cooperation with Egypt is more dynamic than ever. It includes education schemes, financial inclusiveness, refugees and migrants, which are a few highlights of our cooperation,” mentioned the ambassador.

Women and youth are an important part of all Swiss projects in Egypt, added the ambassador, noting, “everything is done in the spirit of 2030 sustainable goals. Together with the Egyptian authorities and civil society, we hope to soon add more projects to the green economy sector, and the supply of water in upper Egypt.”

“The theme of this year’s National Day reception is ‘Innovation and Tradition’. This is how Switzerland operates,” said the ambassador, explaining that traditions was obvious in the Swiss dishes while the coffee was being served by a special robot during the event.

Switzerland tries to innovate and add value to its products, affirmed the ambassador, noting that his country has its new solutions in automation, smart cities, and digitalisation sectors.

The ambassador thanked Swiss companies which sponsored the National Day ceremony, adding that all of the sponsors are members of the Swiss Egyptian Business Association (SEBA), which is a key partner of the embassy,

“I must mention the special contribution of our dear Swiss Club which is based in Imbaba,” added the ambassador, noting that 2018 is the 30th anniversary of Pro Helvetia in Cairo.

For decades Pro Helvetia Cairo, the regional office of the Swiss Arts Council for the Arab region, has been incredibly active in promoting artistic exchange between Switzerland and Egypt.

Pro Helvetia’s liaison office in Cairo opened in 1988. This office has allowed for lively cultural exchanges in a number of areas between Switzerland and the Arab region, according to a DNE’s report which was published on 1 August.

The ambassador also thanked both the current director of the regional office Dalia Soliman, and Maison Mahfouz who has worked 20 years for the Pro Helvetia in Cairo, and will soon leave it.

For the first time in Egypt and Africa, the Swiss National Day celebration attendees listened to the Kaleidoscope String Quartet (KSQ).

“The Quartet will show us how it defines its own musical language by eliminating musical boundaries, and exploring the connecting links to other musical genres. They will play for us some pieces from their new CD, as well as some beautiful pieces from their older repertoire,” concluded the ambassador.