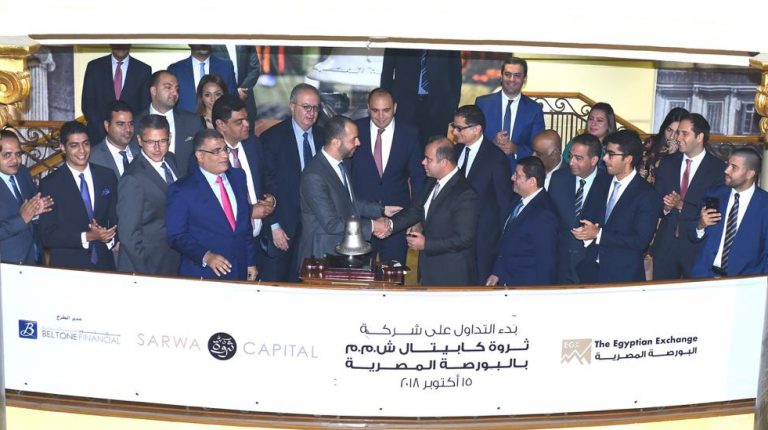 The Egyptian Exchange (EGX) trading platform on Monday received the 226th entry on its list: the shares of Sarwa Capital, which will be traded under Sarwa Capital.

A general public offering of 295.2m shares was floated, which accounts for 47.2% of the company’s capital. The price was set at EGP 7.36 per share at a total value of EGP 2.2bn.

The share of non-Egyptians, Arabs and foreigners, reached 52.3%, while the share of Egyptians stood at 47.7% of the total (public and private).

Mohamed Farid, head of the EGX, said that the total IPOs on the EGX have amounted to EGP 5.2bn over four placements in different sectors in the first nine month of 2018, against EGP 3.9bn last year.

Farid said that the strong demand from Arab and foreign investors to represent 52.3% of the total offer is a very strong message that Egypt is on the right path by implementing reforms on all levels, financially, monetary, and legally.

Bassem Azab, managing director of Beltone Financial Holding, the global bookrunner and coordinator for the placement, said that the offering witnessed a great deal of interest from institutions and individuals both inside and outside Egypt, which was evident in the private placement coverage rates which reached 11 times in addition to 30 times for the public offering.

Azab pointed out that Sarwa Capital is one of the most attractive companies in the Egyptian market due to several factors, including the free trading rate the company will reach about 47% after the completion of capital increase, and the rate of growth in profits of the company was at 52% on average over the last five years, while a limited number of companies in the Egyptian market achieved this rate.