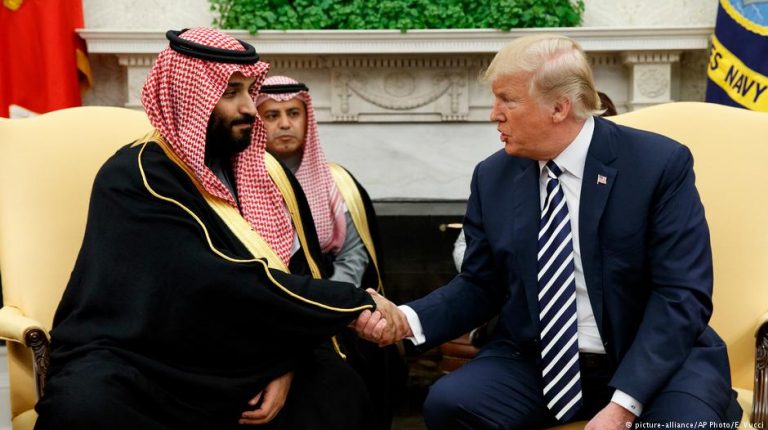 The United States has pledged to put economic pressure on Saudi Arabia over the Khashoggi case, while Riyadh has vowed retaliation in return. What are the measures the two countries can take over the matter?The United States and Saudi Arabia are currently discussing the measures that can be taken if it turns out journalist Jamal Khashoggi was killed by Saudi agents while visiting the country's consulate in Istanbul earlier this month. Over the weekend, US President Donald Trump vowed "severe punishment" if it were proven that Saudi Arabia killed Khashoggi, and sent Secretary of State Mike Pompeo to the kingdom on Monday to discuss the incident.

Riyadh has struck back at the allegations, calling them "lies" and threatening retaliation over any possible economic sanctions by US or other western countries. "The Kingdom affirms its total rejection of any threats and attempts to undermine it, whether by threatening to impose economic sanctions, using political pressures, or repeating false accusations," the state-run Saudi Press Agency said.

So far it still remains unclear how Trump would "punish" the kingdom economically over the journalist's disappearance, but major figures in the US Congress, such as Florida Senator Marco Rubio, have suggested halting arms sales to Saudi Arabia. "There's not enough money in the world for us to buy back our credibility on human rights if we do not move forward and take swift action," Rubio said. "Arms sales are important not because of the money but because it also provides leverage over their future behavior," he added. Republican Senator Jeff Flake has suggested cutting off US military aid to Saudi-led forces engaged in the conflict in Yemen.

Private companies have already taken a tough stance towards the allegations that Saudi Arabia possibly killed Khashoggi, a major critic of Crown Prince Mohammed bin Salman. The CEO of JPMorgan Chase, Jamie Dimon, along with several other Wall Street top brass such as Ford Executive Chairman Bill Ford have pulled out of the kingdom's Future Investment Initiative conference.

"Global investors are seriously reconsidering their deals with Saudi Arabia due to pressure from the media and their customers," Günter Meyer, the director of the Center for Research on the Arab World at the University of Mainz, told DW. He added that Khashoggi's disappearance had a "serious impact on the global economic attitude towards the kingdom."

Read more: The Saudi business conference should be left to wither in the sun

Martin Beck, a Professor at the Center for Contemporary Middle East Studies at the University of Southern Denmark, told DW that Saudi Arabia could strike back at possible US sanctions by cutting down on its oil production. "If the Saudis cut down the oil their country produces by a significant amount, this could cause a lot of tension on the oil markets and cause oil prices to jump very quickly in a very short amount of time, which would harm western economies," he said. "This means that potentially, the Saudis have some economic leverage towards the West." Such a move would hurt the huge number of US consumers who depend on cars for transportation.

Yet Meyer says Saudi Arabia's threats are a "bluff" that amount to more of a tactic to save face in front of a domestic audience. "The Saudi government-controlled media is stressing that the disappearance of Khashoggi is a conspiracy manufactured by Qatar," Meyer explains. "The Saudi government has said that they will not give in, and will take measures to retaliate against any pressure by the US or other western countries."

Despite the tough posturing by both sides, experts doubt that there will likely be severe economic escalation between the US and Saudi Arabia "I doubt Trump will enact biting sanctions, as I don't think public pressure is high enough for him to do so right now," Meyer said, noting how Trump was very boastful about going to Saudi Arabia last year and signing multiple arms deals. Moreover, he said that Russia is hoping to swoop in on the tension, with the possibility that Riyadh will buy more arms from Moscow and even allow a Russian military base on Saudi soil.

Beck is also skeptical that the Saudi-US relationship is in jeopardy, noting that the US has more leverage in the relationship and the two countries are aligned to reduce Iranian influence in the region. "I think that the Saudis, if they are acting in a rational way, can really not confront the US," he concluded.