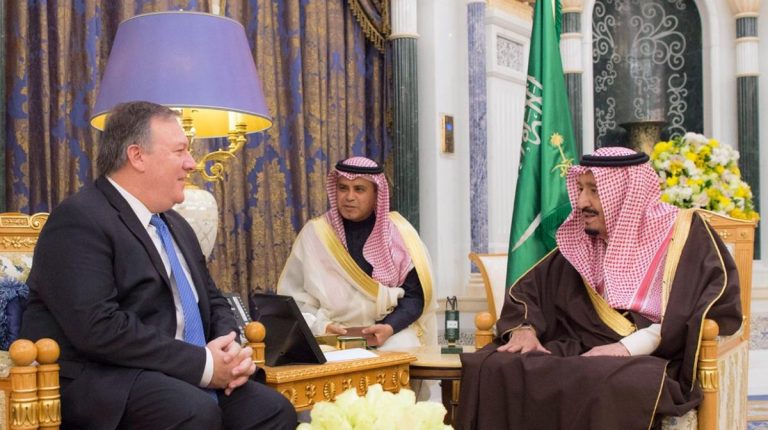 US Secretary of State Mike Pompeo arrived on Tuesday in Saudi Arabia where he met with King Salman Bin Abdel Aziz and Crown Prince Mohamed Bin Salman to discuss the disappearance of journalist Jamal Khashoggi.

The visit came after a phone call between US President Donald Trump and Salman on Monday, while Turkish investigators completed a nine-hour inspection of the Saudi consulate in Istanbul.

Saudi Arabia agreed on the need for a “thorough” investigation into the disappearance of the journalist, said US State Department spokesperson Heather Nauert in a media statement following the meeting, AFP reported.

Pompeo will then head to Turkey, the National Security Council spokesperson Michael Anton said on Monday.

Meanwhile, Turkish President Recep Tayyip Erdogan said that local investigators found that “some materials at the Saudi consulate where Khashoggi disappeared two weeks ago have been painted over.” Turkish media reported that the investigators used advanced searching tools which indicated that there were blood signs removed by painting.

The Turkish Foreign Ministry said that the national police will also conduct a careful search at the residence of the Saudi consul in Istanbul.

Turkish security officials said they believe he was killed by a Saudi hit squad and his body was removed.

Saudi Arabia strongly denied killing Khashoggi and denounced such “lies,” asserting that the journalist left the consulate a few minutes after his arrival.