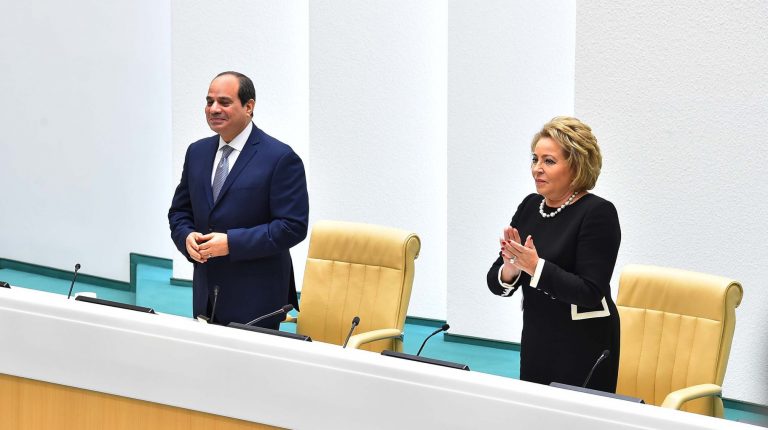 Egypt’s Dabaa nuclear power plant will be a positive sign of the Egyptian-Russian cooperation, and a major milestone in our prolonged partnership, President Abdel Fattah Al-Sisi said on Tuesday.

During his speech before the Russian Federation Council, Al-Sisi added that he looks forward to completing the construction of the Dabaa plant in the upcoming years.

“Similarly, I look forward to the completion of the construction of the Russian Industrial Zone (RIZ) located in the East of the Suez Canal as another example of how strong our partnership is. It is also a new start to enhance Russian investments in Egypt, as we are always eager for your investments and experience,” the president said.

Moreover, Al-Sisi also praised the Russian decision of resuming its direct flights to Egypt. “Our efforts have been successful,” he noted, adding “I am sure that flights will be also return between the Egyptian and Russian cities. Therefore, streams of Russian tourists could be back again [to Egypt], who are always welcome in their second homeland.”

Last April, Russia resumed its direct flights to Egypt almost three years after they were halted, following the bombing and crash of a Russian passenger jet over the Sinai Peninsula, which was claimed by the Islamic State group in 2015, killing all 224 people onboard.

Al-Sisi also commended Russia’s support to Egypt following the 30 June mass demonstrations in 2013, noting that those efforts helped Egyptians to restore their country’s stability and security.

He further asserted that his government is looking forward to enhanced coordination with Moscow to counter joint challenges, particularly the threat of terrorism.

“I am sure that my talks with my friend, President Putin, tomorrow [Wednesday] will contribute in a new step in the levels of cooperation and coordination regarding current international and regional challenges,” said Al-Sisi.

On the other hand, Al-Sisi on Monday met with Tigran Sargsyan, the Chairman of the Board of the Eurasian Economic Commission (EEC). Both addressed increasing bilateral economic and trade cooperation, especially in the fields of energy, electricity, infrastructure, and the constructing of modern roads networks, according to Egypt’s presidency statement.

Al-Sisi arrived in Russia on Monday, and he is scheduled to meet Russian President Vladimir Putin and other top Russian officials to bolster Russian investments in Egypt, especially in the Suez Canal Economic Zone.

In parallel with Al-Sisi’s visit, the construction of the RIZ kicked off on Monday according to Russia. The 50-year agreement was signed in May this year, and will be built on an area of 5.25m sqm. The total amount of investment in the project is expected to reach $7bn.