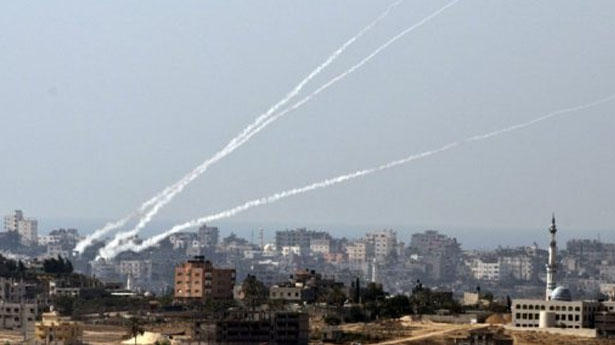 The Israeli army said on Wednesday morning that its fighter jets bombed several targets in the besieged Gaza Strip killing Naji Ahmad Al-Zaneen, 25, and wounding three others, according to Gaza’s Health Ministry.

The raids came as a response to a rocket that hit a house belonging Israelis in Beersheba in southern Israel early in the morning on Wednesday, causing heavy damage, according to the statements of the Israeli army, adding that another rocket landed in the sea near one of the major cities in Israel’s largest metropolitan area, Tel Aviv.

The 20 targets included tunnels and a Hamas military camp, a rocket manufacturing site, and a group that was attempting to fire a rocket at Israel, said Ronen Manelis a spokesperson of the Israeli army, adding that the attack “significantly damaged Hamas’ capabilities.”

“We will defend Israeli civilians,” he added.

Israel announced that it holds Hamas the responsible for the rocket launches, saying “rockets of the type fired overnight are in the possession of just two organisations, Hamas and Palestinian Islamic Jihad,” Manelis said, adding that “Hamas is harming the prospects for an arrangement [on long-term calm] and easing [the situation] in Gaza, which mainly harms the residents of Gaza.”

Following the Israeli raids, Hamas released a joint statement with its ally the Islamic Jihad movement, distancing themselves from the rocket launches and rejecting “all irresponsible attempts” to undermine the Egyptian efforts for brokering a new long-term truce in the besieged strip.

Meanwhile, the Israeli Prime Minister Benjamin Netanyahu is reportedly preparing to hold an urgent meeting with Defence Minister Avigdor Lieberman, the deputy chief of staff of the army, the head of the national security council, the chief of the Shin Bet, and other senior defence officials to assess the situation, according to the Jerusalem Post.

Moreover, the Israeli army closed the Erez and Kerem Shalom crossings into Gaza following the incident, as well as reduced the permitted fishing zone off the coast of Gaza Strip.

Unrest was aroused over the 360km strip since the end of March when thousands of Palestinians engaged in mass demonstrations commemorating the 42nd anniversary of ‘Land Day’ dubbed the ‘Great Return March,’ and following decision of the US President Donald Trump to recognise Jerusalem as a capital of Israel, and moving the US embassy in Israel from Tel Aviv to Jerusalem.

Palestinians demand the return of refugees to their homes, where they were evacuated at the time of establishing Israel in 1948.

The idea of striking Gaza was on the discussion table between Israeli leaders just two days before the attack. On Sunday, Israel warned Gaza of a “fearsome blow” if peace did not return to the Gaza border.

The Israeli prime minister Benjamin Netanyahu said during the meeting of the Israeli security cabinet that “Hamas has apparently not internalised the message: if they don’t stop the violent attacks against us, they will be stopped in a different way and it will be painful, very painful.”

Israeli Defence Minister Avigdor Liberman, accused Hamas of holding Gaza residents as hostages on behalf of Iran. He called on residents of Gaza to “act against the extremist leadership that has taken you hostage in the service of the Iranian ayatollahs.”

“The State of Israel was prepared to improve the civilian reality in the Gaza Strip, but the decision of the Hamas leadership to use serious violence – especially on the same day in which tankers of diesel fuel were brought into the Gaza Strip – is what brought about the decision to cut off the supply of fuels,” Liberman claimed in an Arabic post on Facebook.

On Friday, Ismail Haniya, the leader of Hamas said in a speech in Istanbul, Turkey, that his movement is working on reaching settlements with several parties including Qatar, Egypt, and the United Nations, expressing hope for these efforts to help in lifting the siege on Gaza.

Metropolitan Egypt hired as marketing consultant for US Tony Roma’s