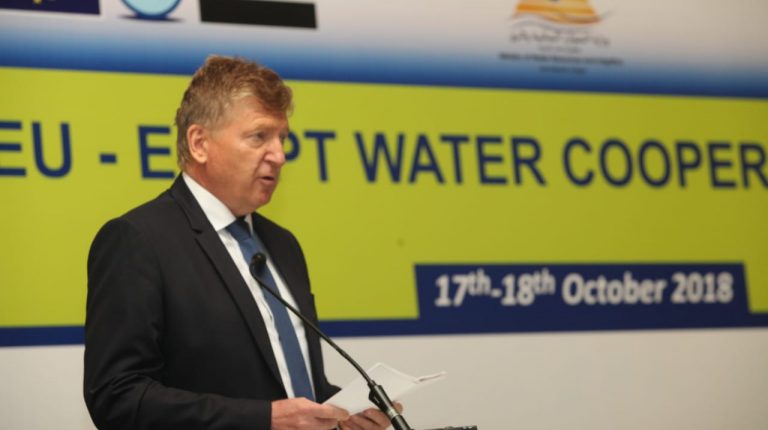 The European Union (EU) will launch the ‘EU4Water in Egypt’ programme, with an indicative budget of €120m within the upcoming three years, said the EU’s ambassador to Egypt Ivan Surkoš.

The new programme aims to support the water sector in Egypt under the state’s  Sustainable Development Strategy 2030, mentioned the ambassador on Wednesday at “The EU-Egypt Water Cooperation Days”.

Ambassador Surkoš and Minister of Water Resources and Irrigation, Mohamed Abdel-Ati, inaugurated the event while ambassadors of Germany and Italy attended the opening, with the participation of the Confederation of Egyptian-European Business Associations (CEEBA).

The ambassador pointed out that the EU was one of the first supporters of Egypt in this area, as it has contributed €450m to establish projects in the field of water during the last 10 years.

The ambassador added, “these grants leveraged funds from European financial institutions that amount to €2.5bn in this sector,” emphasizing that the EU is committed to support sustainable water management in Egypt, through continuing the development projects, as well as the expansion of policy dialogue with decision makers.

“The cooperation between the EU and Egypt in the water sector includes programmes covering 12 Egyptian governorates. These programmes will improve the lives of 12.5 million Egyptians, or about one-third of the population of these governorates, targeting the less fortunate and most in need,” said the ambassador.

The ambassador elaborated that the achievement of Egypt’s overall strategic objectives requires direct dialogue with the private sector, investors, and international financial institutions to discuss the actions needed to create an enabling environment, for strengthening local and international partnerships.

“The EU has taken the first step towards establishing a successful partnership between private and public institutions by launching the ‘European External Investment Plan (EEIP)’ and ‘European Fund for Sustainable Development (EFSD)’.”

The EU launched last March the EU WATER STARS programme along with the Ministry of Water Resources and Irrigation, with a total budget that amounted to €5m as a grant aiming to raise the technical competencies in the water field, where it will continue for 30 months. The EU WATER STARS programme will help the ministry achieve the required reforms, to implement the water security objectives, according to the state’s Sustainable Development Strategy 2030 and the National Water Resources Plan (NWRP) 2037, said the ambassador.

“The EU-Egypt Water Cooperation Days” aims to shed light on the key role of water in achieving sustainable economic growth, and discussing better ways for matching the increasing demand with the scarce resources.”

For his part, the Italian ambassador to Egypt, Giampaolo Cantini, said that his country is committed to providing aid to Egypt in the water resources programmes, agriculture, building capacities with particular focus on the social dimensions, and in line with Egypt’s sustainable development goals.

He stressed his country’s well-planned programmes with Egypt in the fields of water resources and agriculture areas.

The Minister of Water Resources and Irrigation, Mohamed Abdel-Ati emphasised Egypt’s solid relations with the EU in the areas of water resources, noting that about 90% of the water projects in Egypt are executed by the EU.

“We know that we have a water issue and the government has already undertaken serious efforts. Other several steps are required,” said the minister, noting that water quality is a priority for Egypt’s government.

“Germany puts considerable focus on water programmes in Egypt. Germany is working on tackling solid waste problems in Egypt, but there is a lot to be accomplished,” mentioned the ambassador.